Maybe I’ve been reading too many articles recently about photo copyrights, but I was a bit perturbed to see one of my pictures going around on Facebook without any credit. It was the top shot of 10 dogs that made it onto the back inside cover of the CG 2012 Calendar. 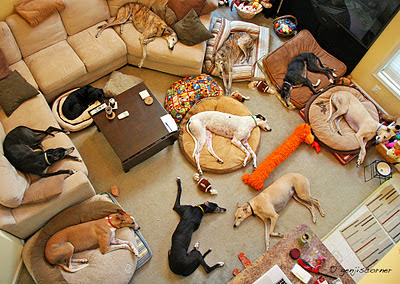 I read some of the hundreds of comments, and they assumed that because the original FB page had to do with greyhound rescue from across the Pond, the dogs were from there too. Some were interested in knowing the backstory behind the picture. A link to my blog would have answered that. One person even said it is their background screen now. Some said they had seen it on other FB links.
The person we saw post a link to it had no idea it was local to him. The more I thought about it, I figured this site got it from somewhere else, who may have gotten it from somewhere else, from whomever snagged it from my blog, and any vestige of where it came from was lost along the way.
Oh well, I will get off my soapbox. I’m all for people enjoying my pictures. That’s why I blog. I have recently started watermarking my pictures after I saw Tales and Tails and Greyhounds Can Sit doing it.
I am not a professional photographer, so this is not a monetary thing. I recently read on Sarah Reagan Snavely’s blog about someone who had copied her work and actually profited from it. Now that’s just plain wrong.
Editor's Note: I do not have a Facebook account, so I did not post this on Facebook.
at 3:47 PM