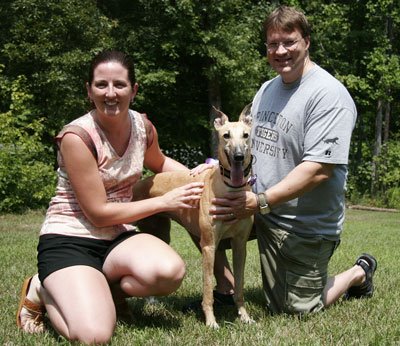 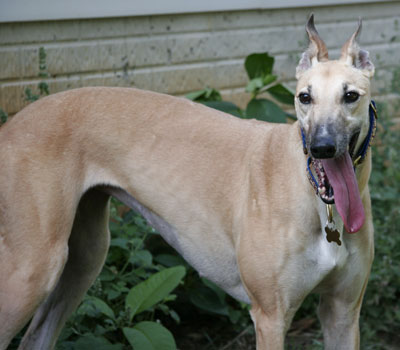 Our one day foster Amy (Mesa Proud Mary) went to her new forever home in Richmond yesterday. She was truly a sweetie. Look at that face. And those ears. She’s a smart cookie. She learned stairs just by watching our guys do them. A self-confident girl, she relaxed quickly and was cockroaching on a dog bed in no time. Wish all our fosters were so easy. Here is a pic of her with her new family. With the quarantine in Florida now lifted, we will be getting a new batch of dogs coming up from Orlando at the end of the week.
at 9:24 AM No comments: 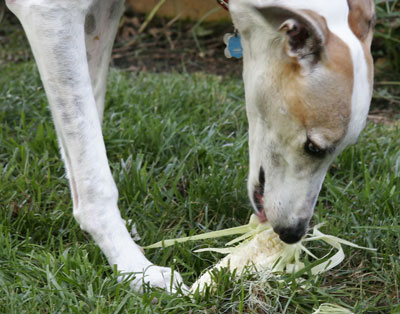 Today is Parker’s birthday. He is well into middle-age at 7 years old. He got to eat a bit of bbq ribs, a corn on the cob, and kiwi for dessert. Actually, we were shucking the corn on the deck, and Lucas decided that it looked yummy. When we turned around, our 4 ears had mysteriously turned into 3 ears. Since it was Parker’s birthday, each of the kids got their own ear of corn. The picture is of Lucas enjoying his prize. Afterwards, we took a walk around the neighborhood. The weather wasn’t too oppressive today. They better enjoy the quiet now. Looks like we’ll be getting a foster dog (or 2) pretty soon.
at 10:08 PM No comments:

Double Gate for the Dogs 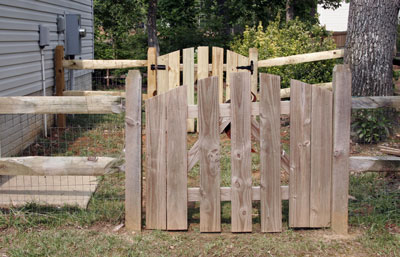 The fence guys showed today, and within an hour, we had a second gate to the yard. This way, when dog guests come to see our kids, they can come in, close the first gate, and then open the gate to the yard. Just like the double gates at dogs parks. Now, at our cookouts when we have a dozen or more dogs coming and going, we won’t have to worry about dogs escaping. Guess we’ll have to plan another cookout soon to test it out :) Happy Bastille Day!
at 6:36 PM 1 comment:

It’s been more than a week into the Tour de France, and they are finally into the mountains. Between OLN coverage and TiVo, I don’t have to miss any of it. The flat stages mostly consist of the peleton sticking together, and the sprinters duking it out in the last several hundred meters. Time differences are measured in seconds. I usually fast-forward through most of the middle part. Now that they are in the mountains (Pyrenees and Alps), the true contenders will be separated from the flat-stage sprinters. The time gaps will now be measured in minutes. On any given day, if your stage time is not within 10% of the winner’s time, you get dropped from the race. Ouch! Riding for 28 days of 100+ miles per day. I get tired just watching them. Maybe I will start saving up for a road race bike. $5000, a bright lycra jersey, and shaved legs, and I can pretend to be a Tour contender too :)
at 8:51 AM No comments: 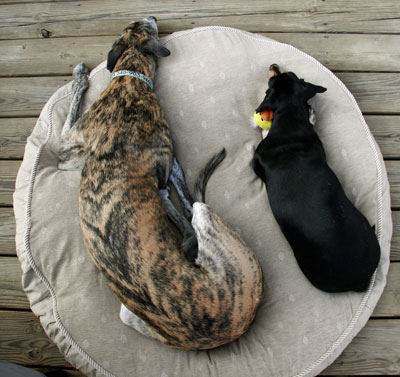 We had our monthly Meet ‘n Greet at the Glen Allen PetsMart on Saturday. We picked up Sadie on the way down. She is being returned after 8-9 months with her new family. I won’t get into all the reasons why she was returned, but it sounds like a combo of a treatable medical issue and the family just tiring of having a dog. This will be their third return to our group, so I’m thinking no more greys for them. She will stay with Trina while we figure things out and look for a new home for her. At the M&G were Sadie, Logan, Dana (w/ Shiloh & Dante), Jo, Stella & Lucas (w/ Parker), and Thunder came from 2 hrs away with his new family. Somehow I seem to attract the crazy ones. I was holding Stella, Lucas, Sadie and Parker as I was walking from the parking lot, and I get stopped by someone wanting to know if they were whippets. Lucas weighs 95lbs. A whippet? I don’t think so. Then I meet a lady who said she wanted a greyhound, but everytime one would try to sniff her and get petted, she would squeal and jump back. Hmm, No Greyhound For YOU!!! After the M&G, we all went back to Trina’s for drinks and watching the kids run around. They had just stood around for 3 hrs at the M&G, so it was much more laying around. This is a picture of Stella and Dante. Both are alpha, and neither wanted to give up the dog bed.
On another note, I finally got around updating a few pics on my website. Finally replaced the winter snow pictures with spring/summer pics.
at 8:34 AM 1 comment:

A few things going on this week. Our latest fosters, Winston and Maggie were adopted out on Tuesday. We will be fosterless until they lift the quarantine down in Fla. On the work front, my company was just bought out by Seimens. They said it will be finalized sometime early next year. Just went through a similar transition a couple of years ago when Bayer bought out my old company. Waiting is the worst part. My friend Dave from Toronto made a spontaneous trip down for the weekend. He actually ended up celebrating ‘Canada Day’ here in the States. Aubry came over and the four of us played ‘Settlers of Catan’ and ‘Taboo’. I’m not much of a board game player, but both of these games are best with 4 people, so I got roped in. We grilled ribs and wings on Friday night. On Saturday, we wanted to try a new place downtown, so we went to Tru Luv’s for dinner. The weather was quite tolerable for late June, so we sat outside and had a view of the river. We had drinks at a few of the bars downtown before heading back. A relaxing weekend with good friends and good food.
at 7:12 PM 2 comments: