The weather was absolutely beautiful today. So we took the kids for a stroll in downtown Fredericksburg. We mainly wanted to see how Zeke & Angel would do in unfamiliar social situations. Both kids did fine. A fire engine blared its horn. A few Harleys burbled by and their ears barely perked. Angel even managed to kiss a baby in a stroller. We got stopped quite a few times so people could ask questions and pet the kids. Guess it’s quite a site to see four greyhounds and Parker come strolling down the sidewalk. We even ran into a lady who was in our obedience class a few months back. Of course she recognized Lucas and Stella before us. In the doggie world, guess we are just our kids’ parents.
at 10:30 PM No comments: 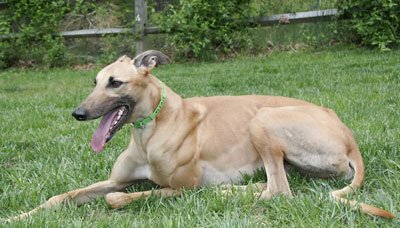 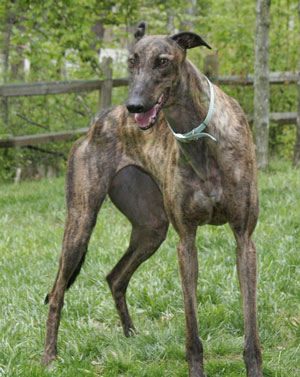 Here are pictures of our latest fosters we picked up over the weekend. Zeke is the fawn male. Angel is the dark brindle female. They are both fitting in quite nicely into our family. We were originally supposed to pick up Zeke and Heather. Angel was originally planned as part of the Saturday haul to Northern Virginia. There was a mixup when the dog haul truck showed up on Saturday. So now we have Angel. We were going to swap Angel and Heather since Heather was planned for a family in our area. But the family ended up backing out. And since Heather is not cat-safe, and we have three kitties, we’ve decided to leave the girls where they are. So it looks like we might have Zeke & Angel with us for a while. That makes 5 dogs and 3 cats. Quite the frenzy during feeding time.
at 8:56 PM No comments: 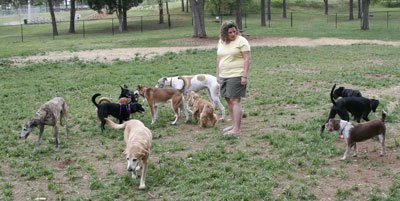 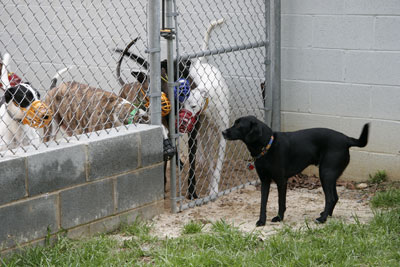 We just returned from our road trip to Winston-Salem to see our friend Susan. The renovations on her house were amazing. If you put a bed in her kitchen, I could live in there. We went for a walk in her neighborhood on Saturday and ran into a couple of Labs behind an invisible fence, but which obviously was not working. They got all worked up and both came running into the street barking at our guys. We’ve had this happen to us before on walks in our own neighborhood, and the dogs have always been friendly. Just out for a sniff before heading back home. These guys were baring teeth, and before we knew it, Lucas had a couple of punctures on his back side. I herded them back into their yard at which point the owners came out and called their dogs in. We called them later to let them know that their dogs had gone past their electric fence. They feigned ignorance, but this has happened to them at least once before that we know of. On Sunday we went to the local dog park. The first picture is of our guys making some new friends. On our way back home on Monday, we stopped by the Project Racing Home greyhound kennel near Greensboro to pick up a couple of greys, Zeke and Angel. The second pic is of some of the greys trying to figure out what kinda funny looking greyhound Parker is. Zeke stood up in the car the entire 4.5hr drive home, with much growling from our guys whenever he stepped on one of them. They settled in pretty quickly, having no problems with the stairs or doggie door. I will post pics of them as soon as I get a few good shots. Also, I have added a link to Trina’s greyhound blog. We have known her for years and now she and her husband Jason recently adopted Dana and have been fully sucked into the greyhound ‘cult’ too.
at 8:02 PM No comments:

I put on close to 1000 miles this week for work. And gas is near $3 a gallon. We’ll put another 600+ miles this weekend to visit our friend Susan in Lewisville, NC. She has the two English Cocker Spaniels from a previous post. It’s been well over a year since Kristen has been there. I stop by sometimes when I am in the area for work. The renovations are finally done on her house, so we’re going down to check it out. Susan has known Parker since he was a pup, and met Stella not too long after we got her, but she hasn’t met Lucas yet. Lucas loves to flirt with the girls, and both her English Cockers are girls. On the way back, we are going to stop by a rescue kennel near Greensboro and pick up a couple of greys. We will be fostering both of them for a bit. We might have to strap our luggage to the roof rack if we’re going to comfortably fit 4 greys in the back of the 4Runner. Parker always lays on a dog bed on the lap of the person in the passenger seat. That should be a fun drive back.
at 9:50 PM No comments:

This will be the first weekend in a while since we haven’t had a foster dog with us. We dropped Thunder off last weekend in Richmond. The house feels empty with only three dogs and three cats :) We have a Meet ‘n Greet in Stafford today. Not sure what the turnout will be since it is Easter weekend. Hopefully the weather will lighten up today. It rained through most of the night, and they are calling for scattered/isolated T-storms today and tomorrow. And it’s supposed to get to 85 today. With all the rain, sounds like hot and muggy to me. Where did Spring go? If the weather holds out this afternoon, I will make fajitas on the grill and Aubry and Kris will make sure we don’t run out of margaritas. A Cinco de Mayo practice run.
at 7:16 AM No comments:

Back to Back Meet 'N Greets 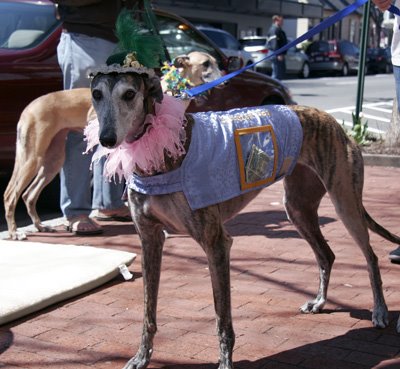 We had two Meet ‘N Greets this weekend. Saturday’s was at the PetsMart at Virginia Center Commons in Glen Allen. This was the first one for VAGA this far south. We had quite the turnout as you can see in the picture. This was also our first time with a ‘Donation Dog’. Stella stepped up to the plate and even put on her fancy hat. Stella loves to get dolled up and meet people. We got more donations than at any previous meet ‘n greet. We had quite the turnout of VAGA volunteers. It was nonstop people interested in knowing more about greyhounds. Hopefully we’ll get some applications from this event. We had a few interested people at our Sunday meet ‘n greet at Dog Dayz in downtown Fredericksburg. Things are really speeding along for VAGA in Central Virginia.
at 8:47 PM 1 comment: 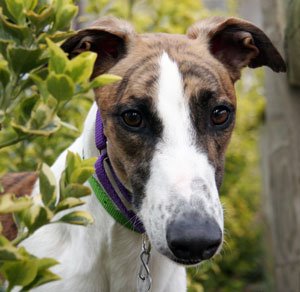 Picked up a new foster today, Graces Thunder. He’s not even two years old yet. That means he probably never raced. We’ll only have him for a couple of days before he goes to his new foster family in Richmond. He’s young, adventurous and smart. He gets along with our kids and Casey too. Casey is going to her new foster/forever home tomorrow. They will foster for a week or so, and if everything works out, they will keep her. Thunder figured out the stairs and doggie door quite quickly. He managed to eat 5 cups of food just for dinner. He might be the most ravenous eater we’ve had yet. Like most boys, he marked everything in the yard and tried to do the same inside. A loud ‘NO’ a couple of times, and I think he’s caught on. Since he’s pretty young, I think he’ll be a handful for a while. Hope he ends up in a high energy family.
at 9:39 PM 2 comments:

We had our first good thunderstorm on Monday. I was prepared with a 50lb bag of grass seed. With such a wet winter and the greys running in the yard, there is a track of missing grass where they do their circuit. When the ground is soft, the chunks of grass go flying when the guys are chasing each other. Never had this problem when it was just Parker. Hopefully some of the grass will take. Since the greys tend to lick themselves clean like cats do, we are told not to put down fertilizer on the lawn that they could ingest. So we shall see if the grass has a chance to grow. I don’t really care if weeds took over the entire yard. I would just like a green covering so the ground isn’t so hard for the kids to run on, and they don’t track in the red clay that wreaks havoc on the carpet. That’s why we have a steam cleaner.
at 12:06 PM No comments:

The weather was just too nice not to sit out on the deck, drink some wine, grill some steaks, and after the sun went down, start a fire in the iron pagoda, switch to drinking Port and talk well into the night. So that’s exactly what my wife, Aubry and I did. We laid some dog beds outside next to the fire so our kids could lay with us. All said and done, we put the fire out at 1:30am and managed to go through 2 bottles of wine and 2 bottles of Port. What a great way to bring in the warm weather.
at 7:46 PM No comments:

Seems to be a lot of greyhound weekends these days. This weekend we had a meeting of our local volunteers followed by an adoption of four dogs. Today we are taking our foster along with our kids up to Leesburg for a Meet ‘N Greet. A family is interested in meeting Casey. Next week is back to back Meet ‘N Greets on Saturday and Sunday. Saturday’s is the first one for our group in Richmond. Hopefully there will be a good turnout. And our schedule for the rest of the year looks much like that. Add in a few dog hauls, throw in a car wash and golf tournament to raise money and awareness, the annual VAGA picnic, maybe a trip to Florida in the fall to visit the track and kennels, and this will turn out to be quite the greyhound year for us. Just to make sure, we may throw in a big event like Gettysburg or Dewey beach. Free weekends will consist of seeing how many greys I can fit in my backyard while I grill yummy food for their humans.
at 8:13 AM 1 comment: