We had a houseguest last week. Eleanor is an only dog, and she was showing signs of separation anxiety. So she came to stay with us for a week to see if she was inherently neurotic or just needed some company. Lucky for us, she just missed being around other greys. She got along with just fine with our kids. And there were no mishaps.

She seemed a bit wary of the camera at first. 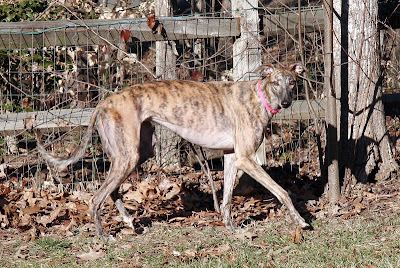 She seemed more comfortable in the house. 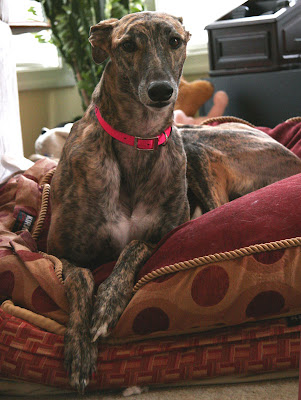 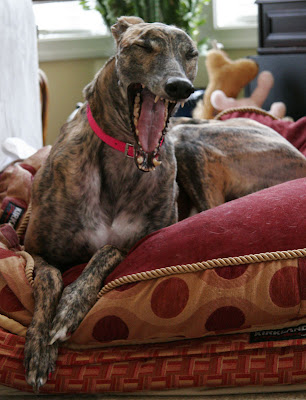 Playing in the Snow

Unlike some people in the southern hemisphere who are on their summer vacation, we got our first real snow of the year. The last snow we had when Alex was here was just a dusting. This was a good three inches. Kris came home early from work, and we played with the kids in the yard. We only got one day to get good pics. The following day was in the 50s, so most of the yard melted in a day.
Kris threw the toy, and Stanley got to it first. The girls then took off. This confused poor Stanley, so he just stood there with the toy in his mouth. 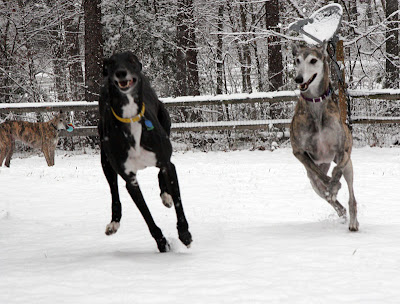 Once again, the girls see that Stanley is indisposed, so they take off. Poor Stanley. 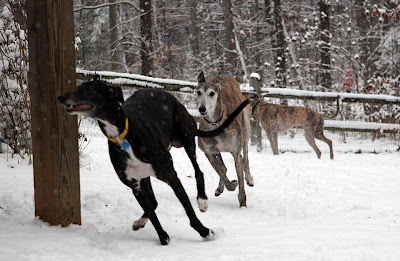 Jaime is kicking up some powder as she rips around the yard. 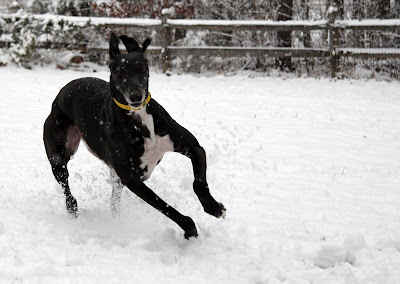 Not sure if Kris threw a snowball at her butt, but she whipped around to see what it was. 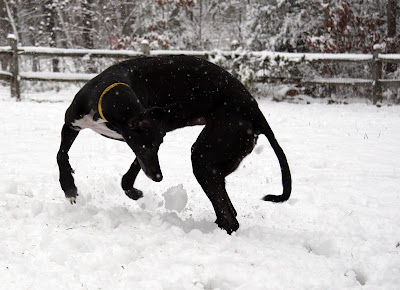 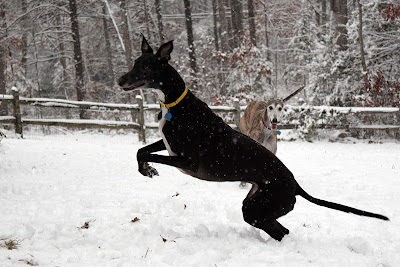 Of course the snow turns Stella into a crazy woman. 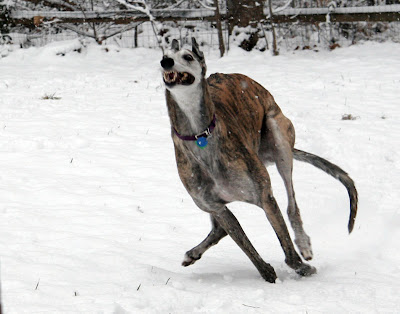 Jaime calmed down for long enough to take a composed shot. 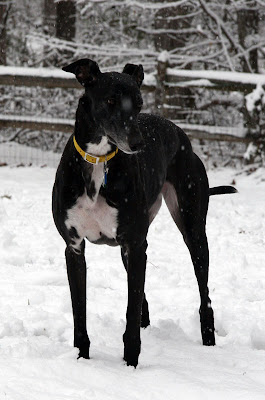 Stanley decided to pose for the shot during mid-run. 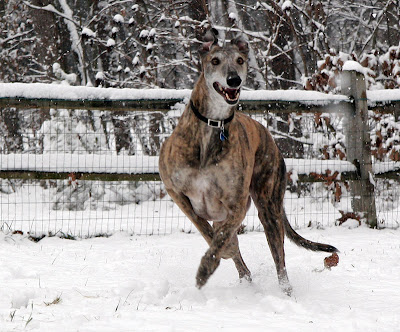 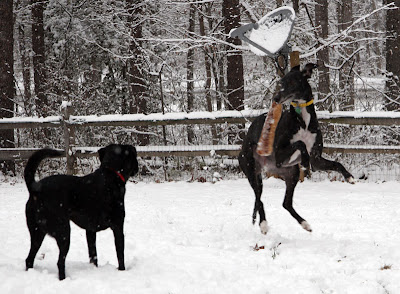 When she wasn’t looking, Parker snatched the Booda bone and made a run for it. 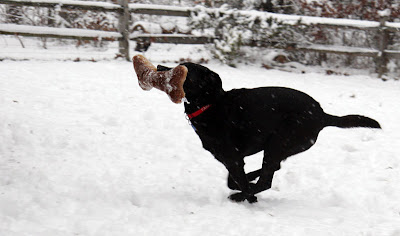 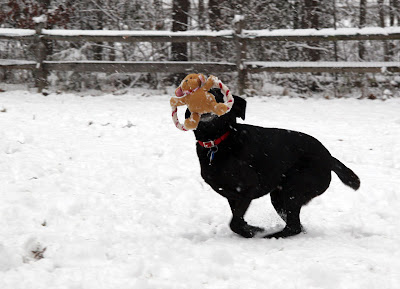 Stanley finally got his act together and made a run around the yard with the potato head. 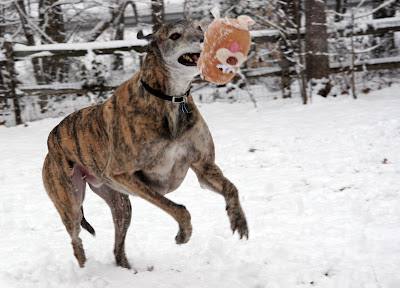 Back to the Greys

We did a bit of babysitting over the Holidays while people went on vacation. Our kids enjoy having company over. Jaime enjoyed sharing the couch with Zoey. 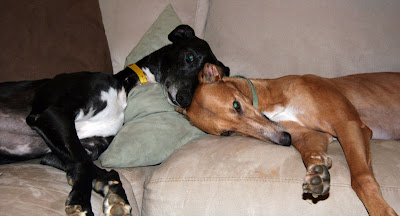 Zoey’s sister Dora enjoyed snuggling on the couch with our kids. Stella is not in the picture because she wanted no part of this whole ‘sharing the couch with strangers’ business.

Another boarder was Luna. She stayed with us for week while her family was in New Hampshire. She got along just swell with our kids. Everyone wanted to be seen with Luna. Stanley with Luna.

Stella decides it’s ok to be seen with Luna. 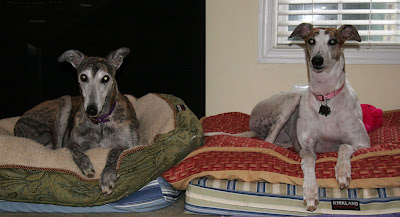 Jaime does her impression of Tamale’s up-the-skirt peekaboo. Looks more like, ‘leave me alone daddy, I’m trying to get some sleep here’. 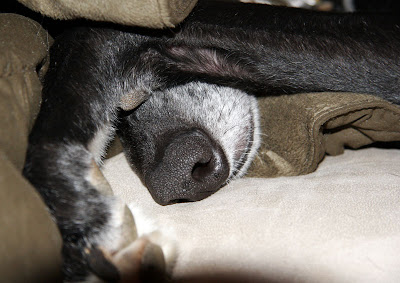 Jack (aka Woody Jack the Galgo) posing at our first Meet ‘n Greet of the year with his sisters Tallie and Topaz. We had 24 greys show up for the event. Greyhounds wherever you turned. 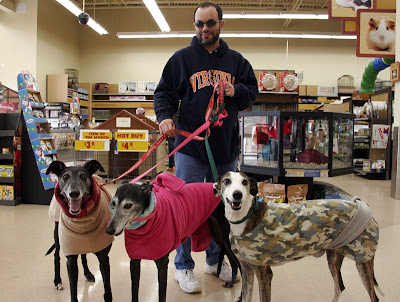 Look out cute I am. Everyone says so. I look smashing in my camouflage coat! 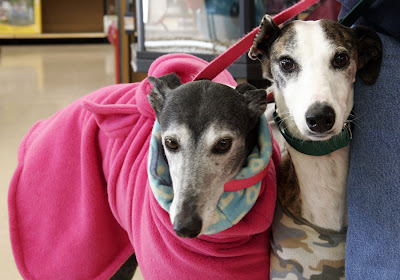 I love you so much Stella. Do you mind if I breathe on your eye? It’s a sign of affection. I promise. 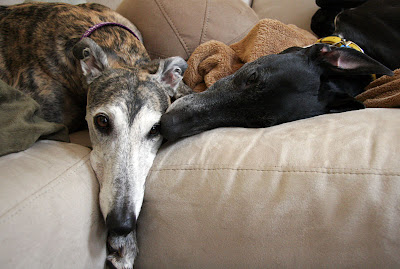 Jaime has many ways of showing her affection for Stella. Sure sis, you can get me in a headlock. If that’s what makes you happy. Jaime is always putting other peoples happiness before hers. She’s such a sweetie.

This is what happens when greys fall asleep on the couch while sniffing each other’s butts. I guess the aroma made them narcoleptic.

A parting shot of Stanley and his football. His new favorite toy. Though he may be sliding off the dog bed, he will save the football. He has dreams making the NFL draft and becoming a Hall of Fame linebacker. 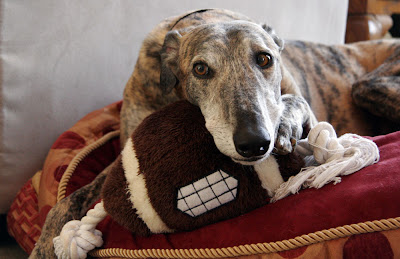