The Forester beeped in reverse, even when there was nothing really behind it. With the height of the lower deck from the driveway, and the width of the new gate, it was perfect for backing up the Forester with about an inch of leeway on either side. The kids were more than happy to jump into the back at this height. The rusty howling dog watches over everyone as they pack in. 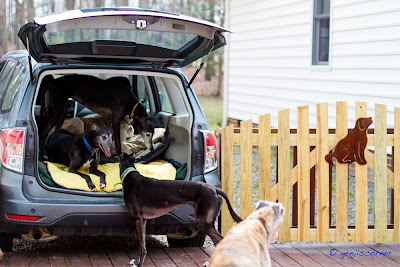 I changed jobs this week (similar position, different company) and had to give the Forester back. I hope my new company car is also a greyhound-friendly vehicle. The kids love breaking in a new company car, aka hair everywhere and nose prints on every accessible window.

Kris took some video on her iPhone of Jaime after breakfast using the doggie door, coming down the stairs, and hopping down the ramp. Our doggie door is in the storm door. The main door is closed when we are not around, so no critters can get in or out.

After finishing her business, she’s comes up the ramp, and handles the stairs with ease. Stanley wonders what the big deal is.

Jaime catching some sun on the deck. Laying like this does make it a bit harder for her when getting up.

What are you waiting for Jaime? 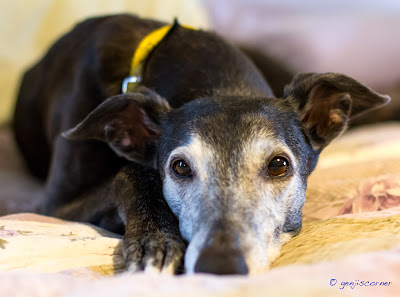 Oh, I see. They’ve only partially completed the deck after Day 1. 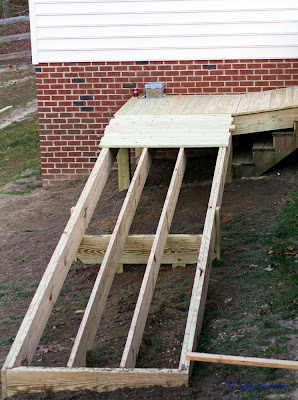 When the ramp was completed. Stella, being a considerate big sister, tested the ramp to make sure it was ready. 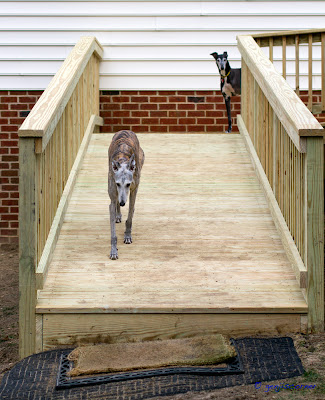 Ok Jaime, you can come down now. 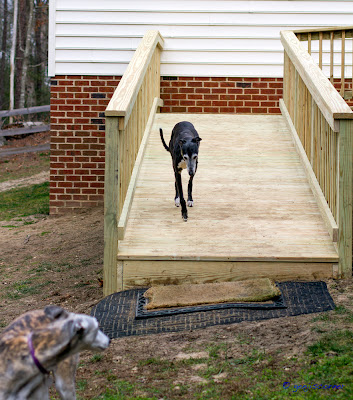 Stella: It was easy coming down. Now how do we get back up?

We also had a new storm door with a doggie door put it. Blue loved it, and kept going in and out. Freedom. No longer waiting for a human to open the door. 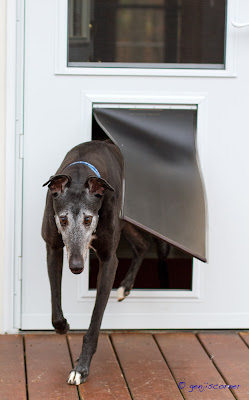 Blue liked it so much he didn’t give anyone else a chance to use it. Poor Stella was traumatized, and didn’t want to use the door after this. 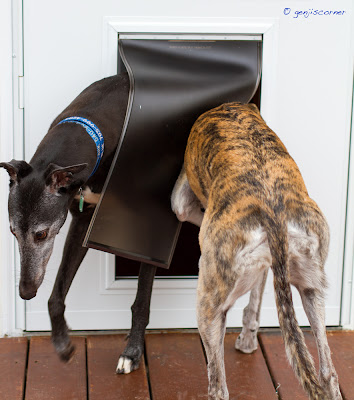 Jaime had no problems using doggie door, so with the ramp installed, she can now make it to the yard without supervision.
at 2:38 PM 13 comments:

Jaime would like to thank everyone for their well wishes and hugs. She is doing great after her first chemo treatment. 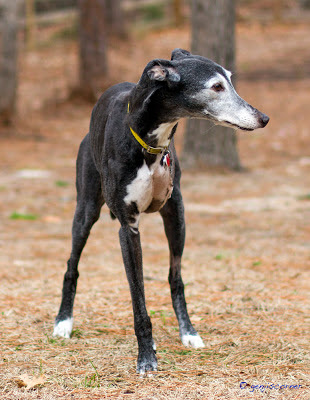 On Sunday, Feb17th while getting a treat in the kitchen, Jaime slipped, her legs splayed out, and when she got back up, one was dangling. We thought a shoulder might have popped out, but we should have known better. A hurried trip to the local e-vet (luckily made it for their last night as weekend after hours e-vet), shot of morphine, x-rays, initial diagnosis of osteo, leg wrapped to chest, and headed home with a traumatized dog (and us too). There were no lung mets, so we decided to go see a specialist. 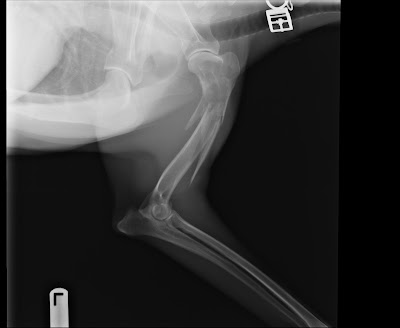 Amazingly, the local specialty surgeon had an opening, so we took her in. I carried her around in the new deep Costco bed, so there would be little movement.  We got the call around 6pm that night that she was out of surgery and looking good. So, within 24 hrs, we went from no sign at all, to a 3-legged dog.
Stella: Where is Jaime? What have you done with her? 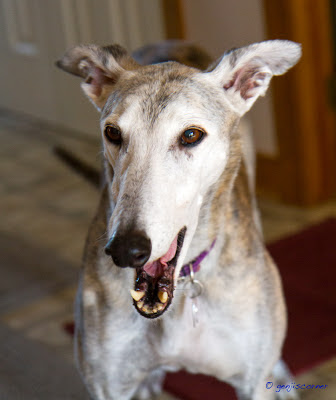 Stan and Stella console each other as they wait for news of how Jaime’s surgery went.

When we went to pick her up the next day, we were told about her regimen of pills and care instructions. 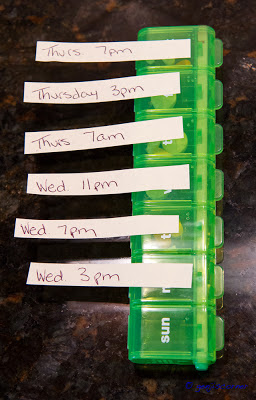 Kris had been FB’ing with a couple of other people with Tri-Paws, and we were warned that the first couple of nights we might be wondering if we made the right decision. I had taken the rest of the week off work, and since I am a light sleeper, I was ready to get up at the slightest wheezing by Jaime.
The boys seemed a bit clueless as to what was going on. Stella went into big sister mode, and hovered around Jaime. 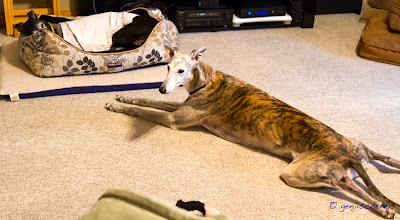 Luckily, Jaime slept through the night without much trouble. Within a day, she was getting up on her own. I would walk to my office to get something, come out, and she would have moved from the living room to the bedroom.

She was so quiet about it, I didn’t even know. Sometimes Stella liked to keep her company. 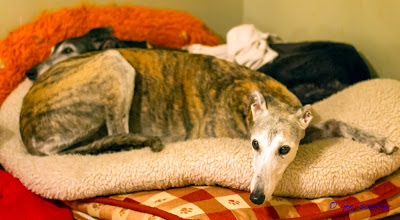 She had to wear a t-shirt to cover her incision and to keep her from licking it. She ate her first few meals from bed. 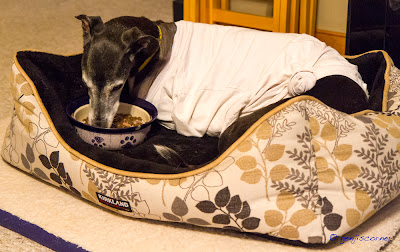 She may have been loopy from painkillers, but it did not curb her appetite. She would come and wait patiently when she thought it was dinnertime. 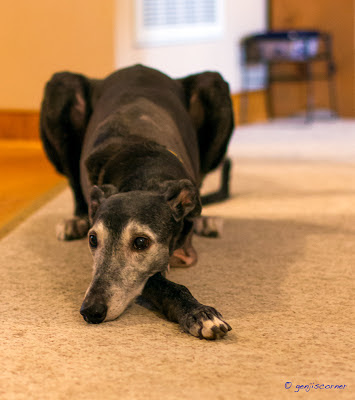 She has no problems eating. She just eats on the carpet instead of the kitchen. 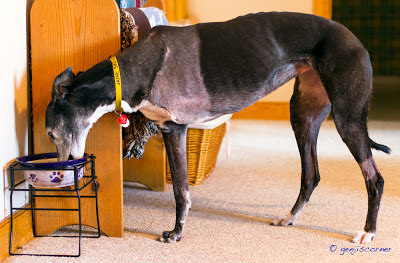 I am a ‘waiting for the other shoe to drop’ kinda guy, so I was waiting for something to happen. It was going way better than we thought it would. We still carried her up and down the few stairs we have on the deck. But now, every few potty breaks, we let her do the stairs herself. 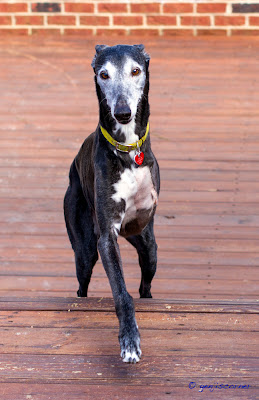 It is definitely hard to get used to seeing the exaggerated movements she has to make to get around. I’m sure she has sore muscles from readjusting to her new body alignment.  Stella is playing doctor and making sure she doesn’t smell osteo in her other front leg. 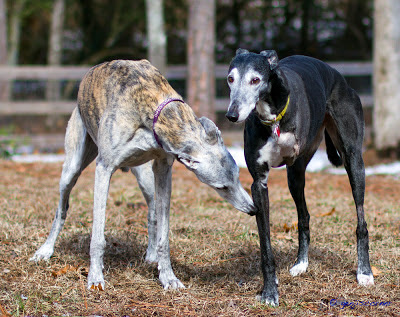 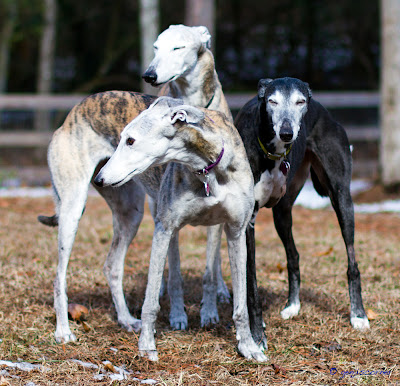 Let’s try this again. Much better. 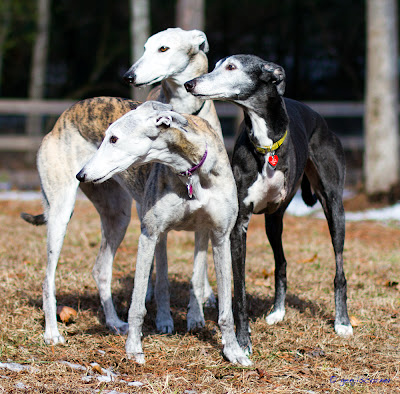 And she tires very easily. She sleeps all day, but that’s not any different than usual. Kevin was also very happy to see Jaime again. 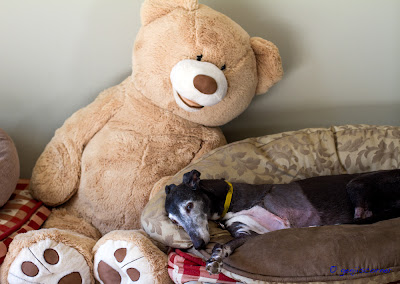 We have someone coming out next week put in a ramp to the yard, similar to the old house. And we have taken our bed off the frame and on the floor. Now even Parker has no problems jumping into bed. Jaime enjoys being able to jump on the bed and throw her head back like the old days. 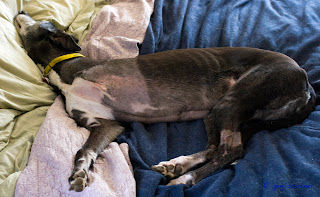 She just had her first chemo treatment yesterday, and is resting today with no side-effects so far.
at 5:38 PM 26 comments: