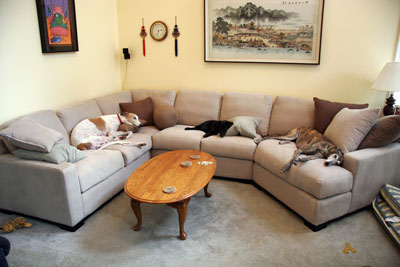 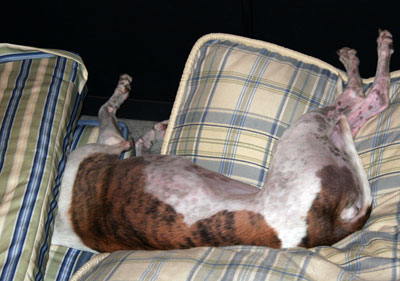 We got a new couch this week. A microfibre L-shaped couch with a curved chaise end. Much more useable space than our old two couch method. The kids love it. They can all fit on it without having to touch each other. Might even be able to fit a couple of humans on there too :)
Hannah has settled in and feels comfortable. Can you tell? Sleeping like that would give me a head rush. She will probably go to another foster home in a week. Hope’s forever home. We dropped off Hope there only a few weeks ago, but it looks like they may be ready for another grey. Guess they really are like potato chips. Hannah’s a sweetie. We will miss her. But we will have our hands full with new fosters from our next haul.
We had a dog haul just this morning. Five greys came up from Orlando. SJ’s Limit, Discount Point, Italian V, WW’s Cruise, and Anawait WV. There were half a dozen VAGA voluteers to meet the hauler and just as many approved adopters who couldn’t give up the chance to get a sneek peek at their new baby. Rex and Linda drove them up to the vet and brought Shirley on their way back. She seemed very happy to be back here. So Aubry will be watching Stella, Lucas, Parker, Hannah and Shirley for us next week. Should be fun at feeding time.
We will be taking off for Florida tomorrow for our vacation (aka dog haul). Driving down with Jason and Trina. Mapquest says 14 hours. A couple of days at the beach near Clearwater, then off to Orlando for SeaWorld, then to the GPA rescue kennel and the track kennels to pick up dogs for the trip back. We should be able to see some races at the Tampa track, St. Pete track, and of course the Sanford-Orlando track where we get our dogs from. Jeez, even our vacations revolve around the greyhounds. Of course if we weren’t driving back from Fla next weekend, we’d be at Dewey Beach for Greyhounds Reach the Beach. We went to that last year, and plan on going and taking our hounds next year. Thousands of greyhounds and their humans in one place.
at 4:59 PM 2 comments: 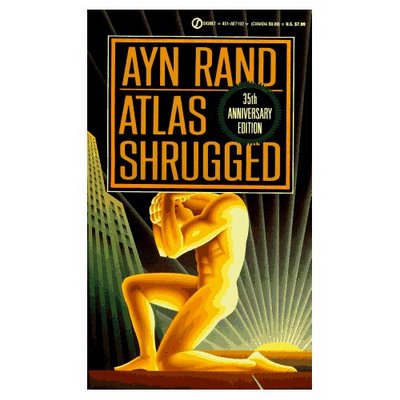 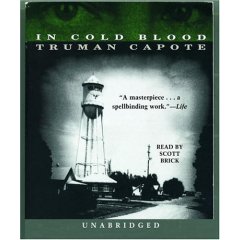 Just finished ‘Atlas Shrugged’ by Ayn Rand. A true classic and epic novel. It seemed a bit Orwellian (1984/Animal Farm) in theme, but much grander in execution. I enjoyed those books too. As an audiobook, it was 55 hours of easy listening. Driving, running, cleaning house, cutting grass... I listened whenever I got a chance. I will take a break from Rand for my next novel and listen to ‘In Cold Blood’ by Capote. We watched ‘Capote’ the movie and that got us interested in reading his book. Philip Seymour Hoffman was great as Capote. I had no idea that Capote had also written ‘Breakfast at Tiffany’s’. Such contrasting styles of books. ‘In Cold Blood’ is only 14 and a half hours, so I might finish that by week’s end. Kris is almost through listening to it, and raves about it. After that, I might go back to Rand and listen to ‘Fountainhead’ which preceded ‘Atlas Shrugged’. Or I may need a fluff book by that point :)
at 6:19 AM No comments: 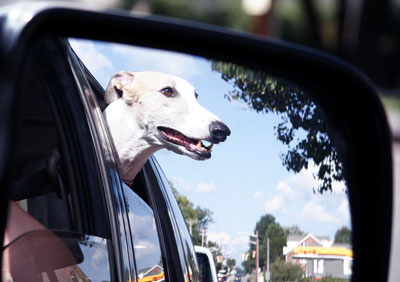 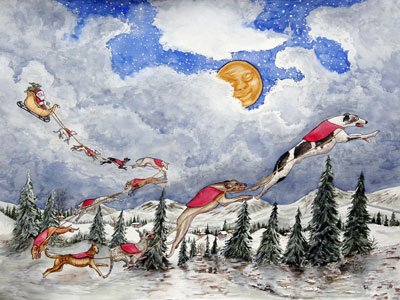 Hannah is still with us. She is turning out to be one spunky little girl. I’m quite mad at her right now. She has managed to chew threw two Mac laptop power cords and the one to my Dell work laptop. Stella chewed one before, and that was a $90 replacement. I was able to splice back together the two Mac laptop power cords and get them to charge. The Dell power cord will run the laptop, but not charge the battery. That should at least keep me going till I can order another one. I am glad she didn’t manage to electrocute herself. Guess we will have to be careful with fosters and power cords from now on. Otherwise, she is a real sweetie. She is learning how to cockroach on a dog bed. She is known to hoard enough toys on a dog bed that there is no space for her. She’s learned that chicken jerky treats come after we use the squirrel call to get everyone back in. She is a pro at the doggie door. I think we will easily find a great forever home for her.
The first picture is of Lucas with his head sticking out of the side of the 4Runner after returning from last week’s Meet ‘n Greet. The 4Runner has a rear window that rolls down, so at stop lights, Lucas likes to stick his head out and entertain whomever is behind us. In the rear view mirror, I usually see people smiling and waving to him. Maybe we should get him some Doggles.
The other picture is a painting from Jason’s mother (of Trina and Jason). This will be used for the VAGA Christmas cards. The painting itself will be framed and sold to help VAGA. I just don’t have that kinda creative talent, so I will just stick to taking pictures.
at 10:29 PM No comments: 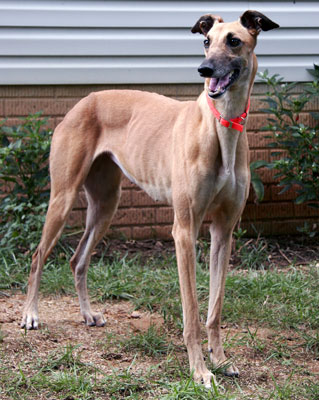 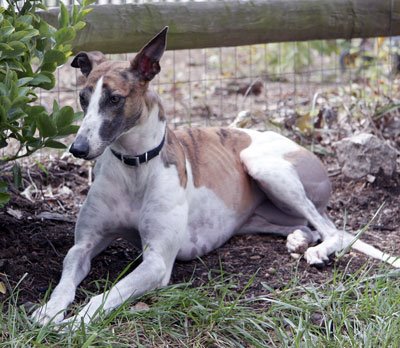 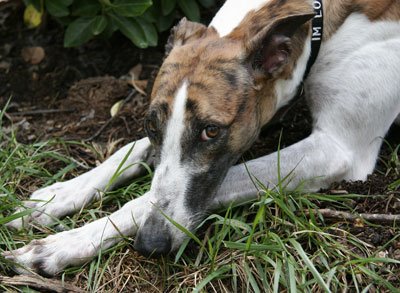 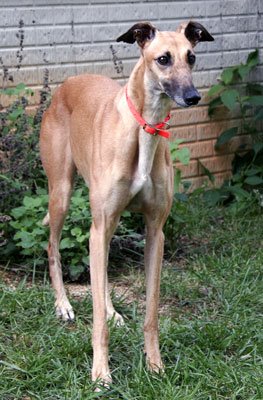 Hannah and Shirley are our two latest fosters. Look how cute they are. How could you not want to adopt either one. Hannah is the white with brindle spots. Shirley is fawn with a black muzzle. They were just spayed on Tuesday, so they are still pretty subdued. They are mostly eating and resting at this point. Both are getting along with our kids just fine. We’ll have to cat-test them when they feel better. Noah, our crabby cat, is the designated tester. Usually he puffs up, growls, and whacks the grey on their muzzle. That’s enough to deter the cat-curious dog. Hannah is Thunder’s littermate. If you look back at his picture, you can definitely see the resemblance. They should be feeling well enough on Sunday for their first Meet ‘n Greet in downtown Fredericksburg. The weather should be nice, so hopefully we’ll have a good turnout.
at 5:35 PM No comments: 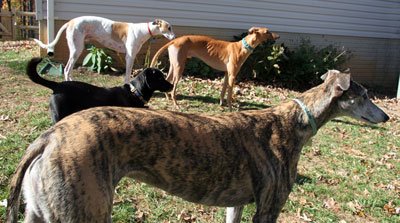 Carolyn and Debbie got 6 dogs on the latest haul from Orlando. Carolyn just got a brand new Honda Odyssey minivan a few weeks ago. I think it it is well broken in now after going to Orlando and hauling back 6 greys (Shirley, Grace’s Hannah, Twisted Stix (Maggie), Titan Flame, Skillet Head aka Jill aka Grace, Sophie, and...).
We went down to Trina’s for dinner Saturday night. Just to hang out and let the kids run around together. Haven’t done that in a while. Jason grilled us a tasty dinner. It’s nice to get grilled items that I don’t usually make for myself. I guess I need to expand my repertoire on the grill. They have a double bed in their spare room. That did not stop Stella, Parker and Dante from crawling into bed with us. Dana and Lucas slept on dog beds next to us. Shiloh’s a momma’s girl and didn’t join us. Needless to say, I woke up cramped and crooked.
On Sunday, Carolyn and Debbie stopped by Trina’s and dropped off Twisted Stix aka Maggie. She was in heat so will have to wait to go the vet. We met the others at Central Park and I drove the 4 remaining girls to the vet in Purcellville. Titan Flame went with Carolyn to go to his forever home.
I didn’t have any pictures from the weekend, so I dug this one up from last year. No one reads a blog unless there’s a picture with it :) We were fostering Rusty at the time. Looks like they have all seen a squirrel in the yard. Ready, Set, Go.
at 6:45 PM 1 comment: 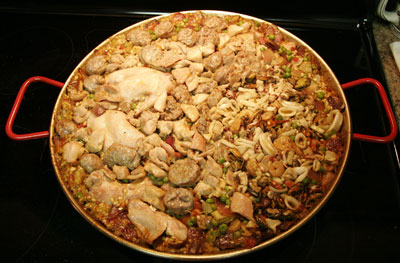 Even the long weekends go by too fast. Kris went with her dad to the Hokies’ first football game this season on Saturday. Between the 7 hour roundtrip and close to 4 hours for the game, that’s an all day affair. The kids and I enjoyed going to the Ukrop’s Meet ‘n Greet while mommy went to the game. It was misting in the morning, but cleared up midday. We had a high of 10 greys. I think that seeing a gaggle of greys generated plenty of interest. Two applications have come in so far from people who met us there. Ukrop’s shoppers are giving people. We made close to $200. That’s not bad for a couple of hours of talking to people about how great greyhounds are.
Burgers and hot dogs are Labor Day staples. So I decided to give a try at my first paella, the famous rice dish from Spain. One of the biggest on-line Spanish stores, La Tienda is near Williamsburg, VA. I went to a site near there last week, so I picked up a paella kit which included the special flat dimpled pan and the spanish short-grain rice. Cooking it directly on the grill was fun. Overall, it was quite yummy, but next time, I think I will leave out the rabbit and make it bit spicier. I tried to be authentic on my first try. Now I can tailor it to my tastes.
On Labor Day, we took our blue leather couch over to Aubry’s. She gave her sectional to the family below her. It was a good couch in good conditon with recliners on both ends. But we ordered a new couch, and there just wasn’t space for it. Hopefully our order will come in soon. Two of the three pieces have come in.
This week I’m going to Newport, RI for our regional meeting. Rumor has it that our group activity is sailing. Sounds like fun. Except the weather report is for rain the next couple of days. I’ve managed to avoid flying for the past 3-4 months, so this will be my first flight in quite a while.
at 8:23 AM No comments: