How much for the 13 year old blue greyhound in the window? She was an ‘Oops Puppy’. In the sense that we hadn’t planned on adopting another greyhound. She was returned through no fault of her own.
Our kids and some boarders are very excited to meet the new gal. 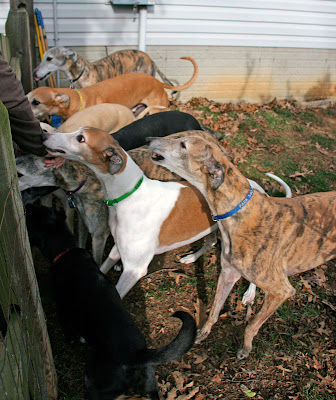 Beth, not so much. 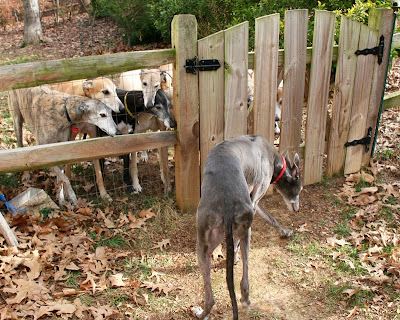 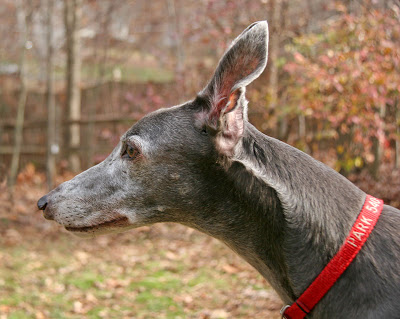 She’s on the thin side with ‘old lady butt’. Trina said Henry had ‘old man butt’, but it got better once they got a little weight on him. 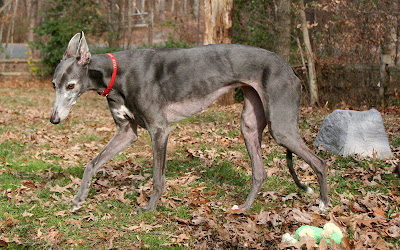 Learning to be a couch potato. 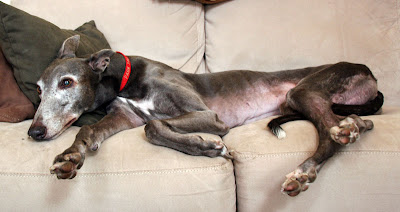 The rest of the gang shows her how it’s done.

Beth relaxes by listening to some Pomplamoose. 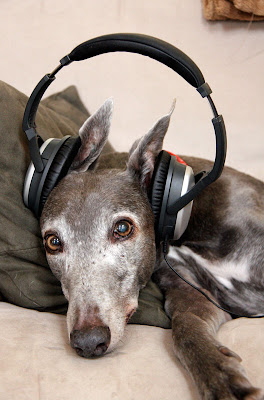 Trying out every bed to find the one that is just right. She liked that this had a separate pillow attachment. Our first snow of the year was just a few inches and fluffy. Perfect for romping around. Stella does her usual couple of laps before calling it quits. 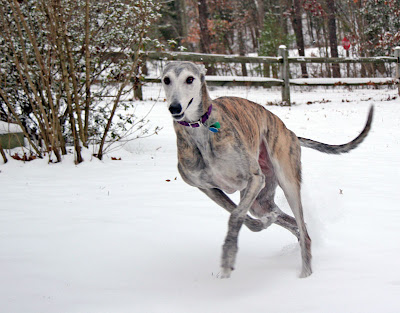 Beth shows that even old ladies get frisky in the snow. 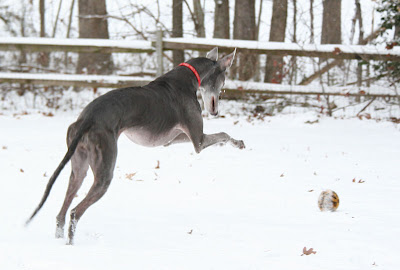 Stanley sees a blitz coming and calls an audible. 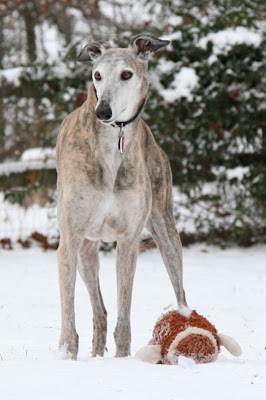 While everyone else enjoys romping in the snow, Jaime takes this time to remove tartar from her teeth using tree bark. 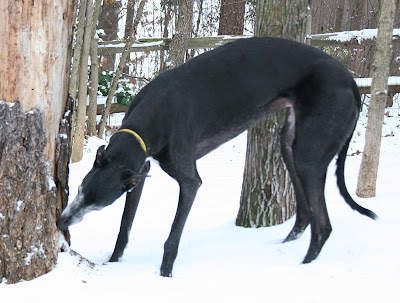 Butt in the air, Beth is ready for the chase. 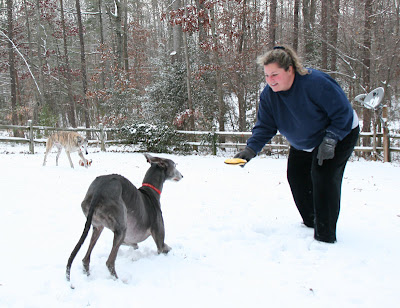 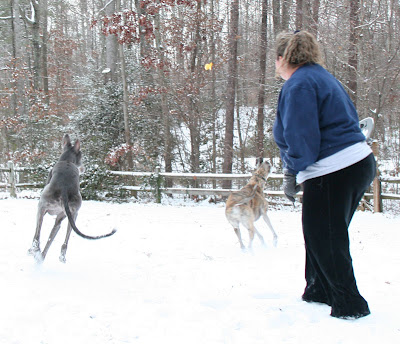 Done with playing in the snow, Beth comes to give her daddy a kiss. 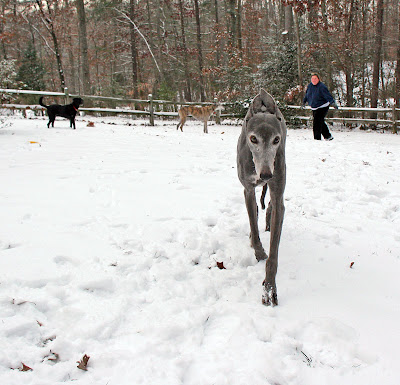 Parker sees his opportunity to snag the fishy. Jaime has a sit-down protest after being told to stop chewing on the bark. 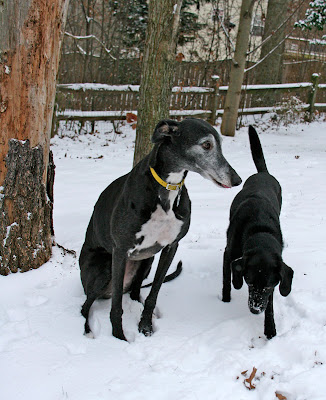 Parker doing his part to make everyone aware of the devastation caused to the bat population of the Eastern U.S. by white-nose syndrome. 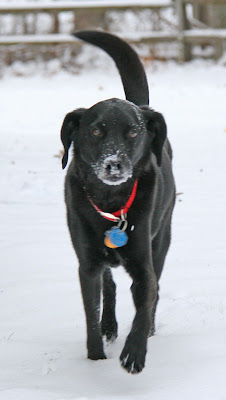 Jorja stayed with us for a week. What a cutie patootie. 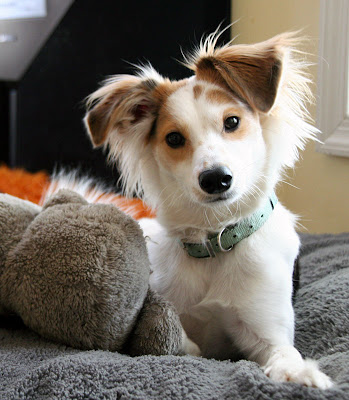 Puppies are so flexible. 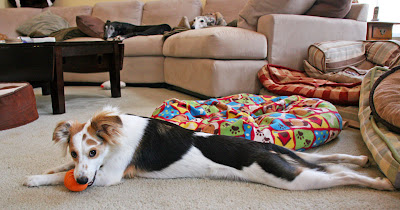 Jaime played with her for a minute or two before calling it quits. 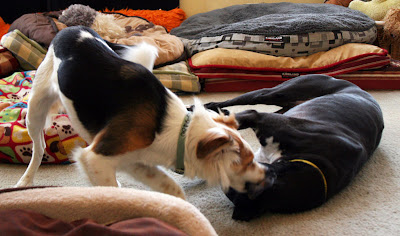 It takes a terrier to keep up with Jorja. Jaime on the couch, and Stella on her bed are not impressed by their antics. 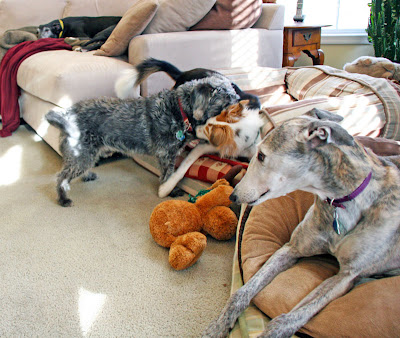 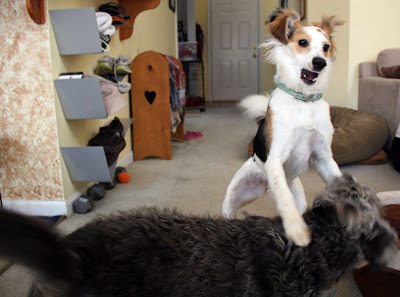 The weather was much better this year for the Fredericksburg Christmas Parade. Last year it windy and sleeting. We dressed the kids with their coats and lights in the parking garage before heading to the meeting spot. 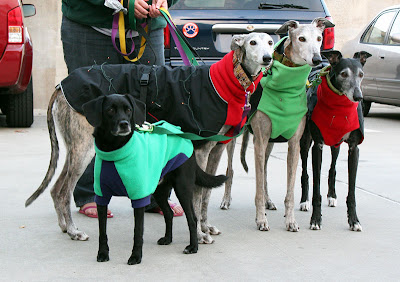 It got dark pretty quickly, so we turned on the lights on their coats.

We had a pretty good turnout with about 40 dogs, and approximately 10,000 people lined the streets to cheer us on.