We recently had an ice storm come through. The kids love the snow. But ICE... That’s another story. I think the look on Stella’s face says it all. 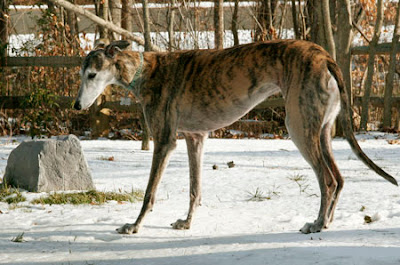 She is disgusted at the fact that we made her go potty under those conditions. Looks like she is waiting for us to cut a path to her favorite potty spot. With their higher center of gravity, the greys are not nearly as sure-footed on the ice as Parker.

In between the ice storm and the recent snow storm, we had a bit of a lull. That did not stop this guy from from running his dualie truck into the ditch. 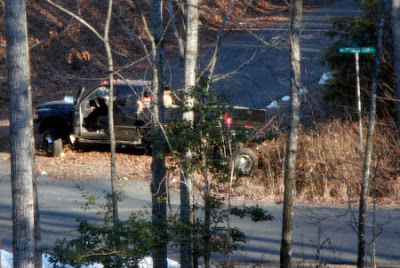 I was woken up on Saturday to the sound of screeching tires and a loud dull thunk. Then spinning tires. I look outside and what do I see? Looks like he tried to take the right turn a bit too early and landed in the ditch. Don’t think it’s too easy to rip the rear end off of a dualie truck, but as the picture shows, the rear end ain’t really connected to the truck anymore.

We have been babysitting Dawson (Italian V) this past week. He is such a love bug. 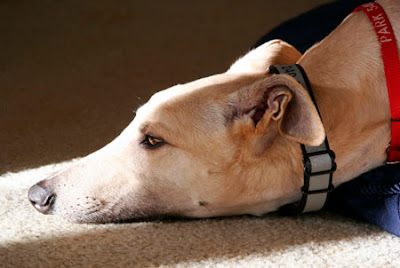 When he wasn't napping, he was chewing on bones, eviscerating stuffies, or chowing down on his food. He is probably the most food-motivated grey we’ve seen. He needed a little fattening up, and we were happy to oblige. It was fun just watching him woof his food down.

What was supposed to be a ‘flurry’ turned out to be probably the best snow of the season so far. As you’ll see in the following pics, the kids are thoroughly enjoying it. It was a nice wet snow which gave the kids plenty of traction for ripping around the yard.

I am being charged by Stella, Lucas and Dawson 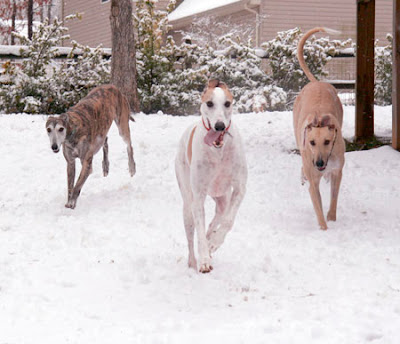 Here are all four of the kids running around. Parker even got in on the action. 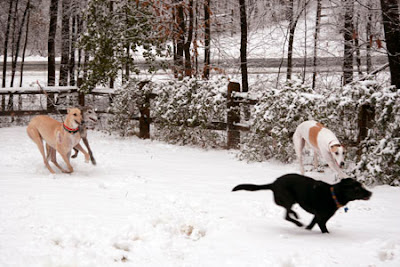 Stella is practicing her final leap for the finish line for when she makes her triumphant return back to the track someday. 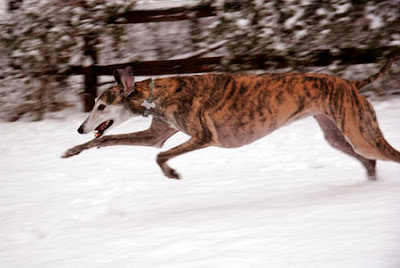 Does Lucas enjoy running in the snow? Just look at that crazed look of enjoyment on his face. 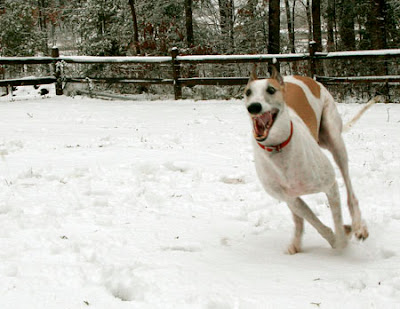 After all the running, Stella thought it necessary to regain her dignity by posing for a regal shot. 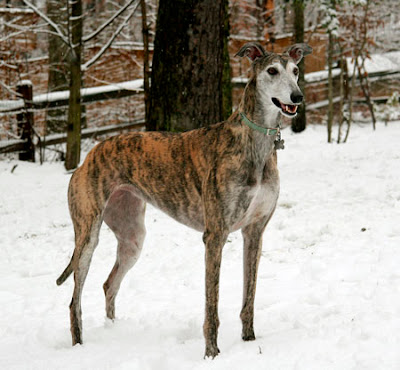 Ripley & Ming
We had unexpected guests Saturday night. We got a call that a fellow VAGA member was in a car accident. We went and picked her up and watched her furkids for the night while she went to check on her husband at the hospital. He was later released with a minor concussion. We are already watching Murphy for a week. Kris’ dad is in Florida for his annual fishing trip this time of year. So we had our crew, Murphy, and Ripley (grey) and Ming (Pekingese). Aubry was also spending the night, so we again had a house full. Ripley is about two and Ming is about one and a half. Much younger than our crew. 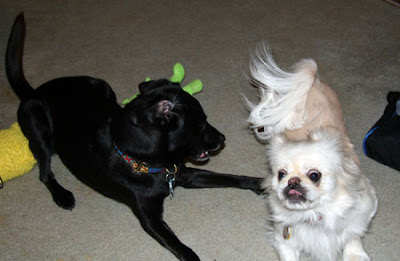 Ming was a bundle of energy and wanted to play with everyone. 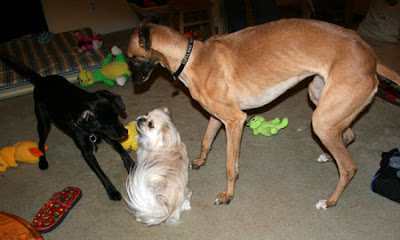 In this shot, Ming is playing with Parker and Ripley decides to get in on the action. Ming was also trying to play with Murphy. Funny to see Murphy getting a taste of his own medicine. Murphy is always the obnoxious one bothering everyone else.
Jason and Trina got a new grill. I’m looking forward to the pictures. Jason was out in the cold on Sunday assembling it. It’s a stainless steel 4-burner with rotisserie and side burner. Looking forward to some nice cookouts. Jason will have fun breaking that sucker in.
With no fosters for a week, Noah has been out and about. At one point this weekend, we were taking a nap with Stella, Lucas, Parker, Murphy and Noah. That’s two people, two greys, two medium size mutts, and a kitty cat on a king-size bed. 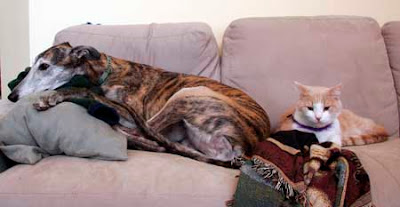 Here is a pic of Noah snuggling with Stella. 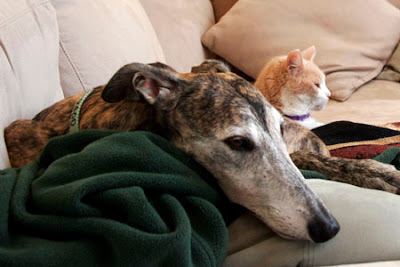 In the last shot, Stella looks like she has a tumor in the shape of a cat head.
at 7:42 AM 4 comments:

Let me just start by saying that I am so glad that neither Stella nor Lucas have any offspring. Kris would be obsessed with tracking them down and adopting as many as we could. We check on the greyhound database periodically to see if any of their siblings have been adopted out. No luck so far. Stella was one of eight. Lucas was one of two pups. He’s such a big boy, that there wasn’t room for any more. Trina’s Dana was one of seven, and greyhound database says four of them have been adopted out. Guess it’s luck of the draw.
Now on to Debbie. She has opened the bag one more time and ‘chipped’ again. Her Ally had 14 offspring. Now Debbie has two of them. LnL Fast Ali now known as Leah, and the newest addition is LnL Fast Lori. 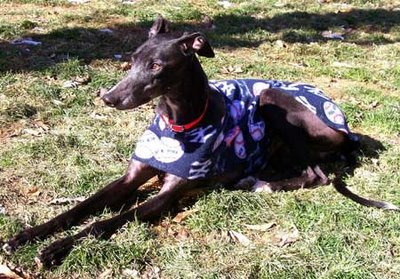 LnL Fast Jake is in the same town with a fellow VAGA member. Now that makes five greyhounds and Toby. And Crystal the cat. That beats our two greys, Parker, and three kitties. Sounds like a game of furkid poker. This last pic is of one of Debbie’s kids, Dream. 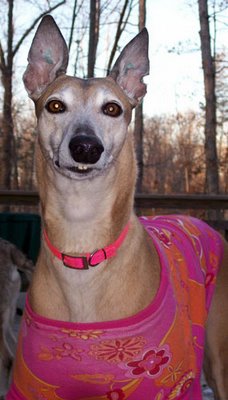 I was at a meeting all last week in Orlando for work. When I left, we had Jassy Gal and KB’s Road Test. They both went to new homes while I was gone. But I returned to a new foster, Blue Boy, soon to be renamed by his forever home as Chatham Blue. 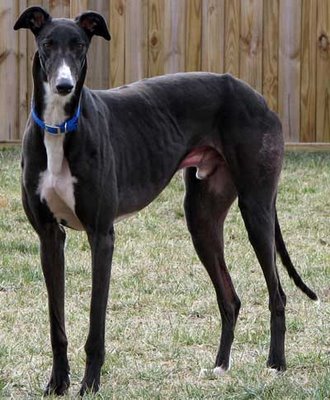 His new family has met with him already, and he will be officially adopted this weekend. So my kids have this week to teach him the ropes. Here is a picture that Trina took of Blue in her backyard this weekend while we were down there for the Super Bowl. I was going to take some pics, but I was so worn out from my meeting that I ended up taking a nap. By the time I woke up, it was almost dark. Luckily, Trina had gotten some good pics of the kids in the yard. Check it out at FastGreyz. I’ve been slacking on my photography duties lately.
On Saturday, I helped Aubry get a new car. She had previously owned a Honda Civic and was leaning that way. I am a Toyota man, so I tried to get her to buy a Toyota. Either a Corolla or Matrix. Kris had previously had a Matrix, and she really like it. Since we didn’t need three cars, we ended up selling it. Aubry test drove an ‘03 Civic and liked it. Then we went to the Toyota dealer, and she test drove a Matrix. It was a fully loaded ‘05. With a little bit of haggling, we drove off the lot a little bit later with a shiny Toyota. 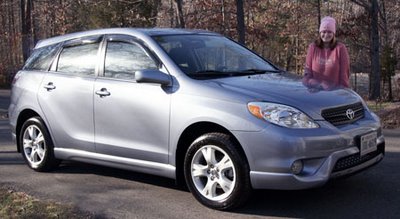 It would have been two shiny Toyotas, but my 4Runner is quite dirty right now. It was quite funny to see the sales guys coveting my ‘98 4Runner because it’s a Limited with only 65,500 miles on it. They are always thinking of the resale value.
Trina and Kris both got tatoos this weekend. Of what? What else would two greyhound cult members get? Tattoos of greyhounds, of course. Trina got one of an outline of a running greyhound. Kris got one of a VAGA-designed greyhound with a heart tail. Check out more pics of them at FastGreyz. 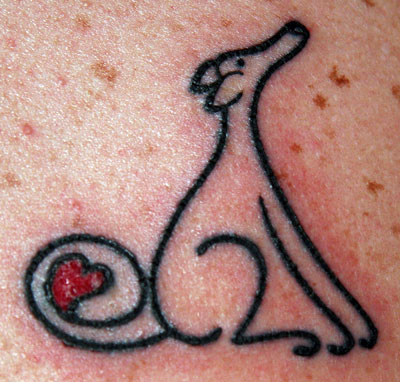 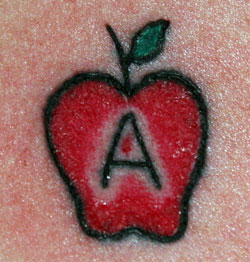 She also got one of an apple in memory of her mother who was an elementary school teacher. There are more shots of the tatoos on FastGreyz. It’s not that I was too chicken to get one. I just can’t decide on a design. Once I do, I will get one too. Stella votes that her daddy gets a tattoo of her portrait with a heart outline around it. She’s such a queen.
at 10:06 PM 2 comments: