My procrastinating gets worse during the Holiday Season. At this rate, my next blog post will be in the New Year. Now I need to go catch up on a month's worth of everyone else's blogs.
These past few weeks have consisted of more babysitting and a couple of anniversaries.
Buck doing his best Nigel Buggers impersonation. 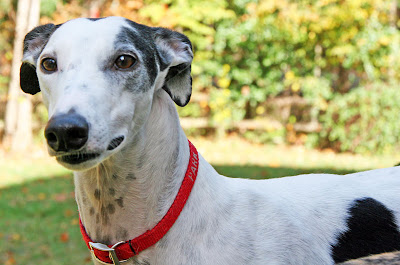 Jaime and Stanley taking a nap under the ‘Doggie Snuggies’ blanket. 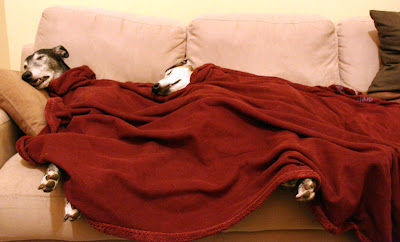 Some downtown Fredericksburg stores opened their doors to doggies and were handing out treats for Halloween. Tourists admire how the kids are willing to dress up for treats. 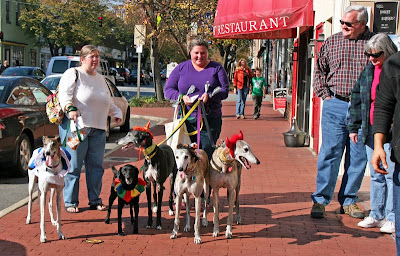 We watched Allie who had all her teeth pulled due to a plaque allergy. Can you say messy eater? Yes, that pink thing is her tongue. 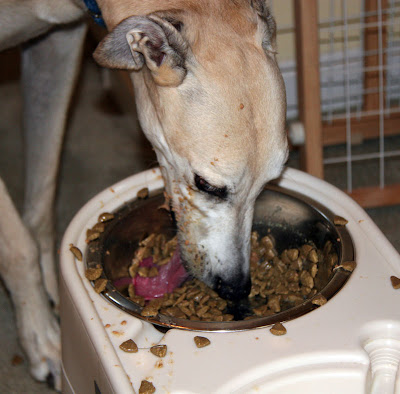 With 10 dogs one weekend, it’s just easier to sleep downstairs on the airbed. Clockwise from bottom left is, Gertie, Stanley, Stella, Jaime, Blue, Billy, Allie and Abby standing up, and Nellie and Parker on the bed with Kris. 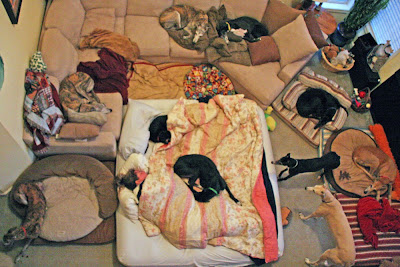 Stella had her 6th Gotcha Day anniversary. Really doesn’t seem like we’ve had her that long. She started it all for us on this greyhound journey. For dinner she got some leg of lamb and barbecue sprinkled on her kibble. She also got lots of hugs and kisses from mommy and daddy. 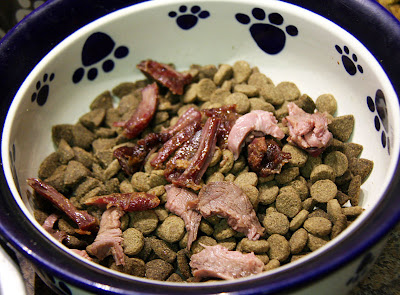 Abby and Blue are the kinda brother and sister who are always poking at each other, then when mommy scolds, exclaim that they weren’t doing anything. They just can’t let the other one have their way. 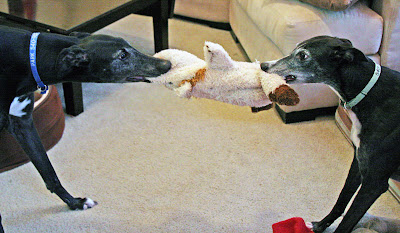 My 40th birthday also marked our 7th year wedding anniversary. We took the kids to Charlottesville for stroll downtown and a bite to eat. We came across this ‘chalk wall’. We first noticed the ‘I Love My Wife’, but then noticed in smaller letters above it, ‘I Like My Wife Okay’. I hope he was alone when he wrote that.

Before we even got our food, Stella was ready to leave. 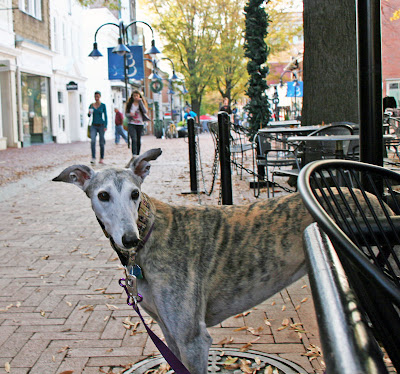 Parker is stunned that Stanley can lay down when there is food on the table. 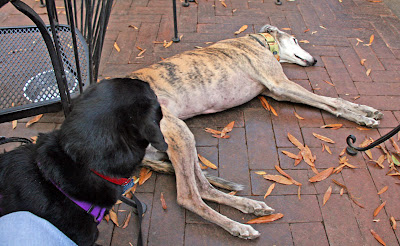 Jaime surveys the table. They all got some calamari and onion rings. The beer was for adults only. 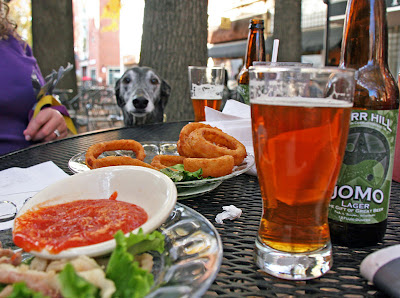 Kris wanted me to add this one last photo of Jaime because she's just so darn cute in it. 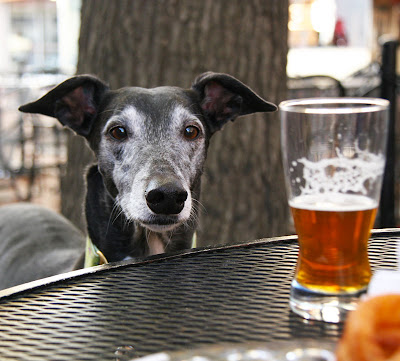 I don’t actually turn 40 till mid-November, but we celebrated a bit early. Unlike Trina who was checking off her bucket list, I didn’t leave the Strip at all. After an unexpected nine hour delay in Dallas-Fortworth airport, we managed to miss dinner at Mesa with Trina, and had just enough energy to grab a bite to eat before heading for bed.
The next day, we were more energized, and Kris and Jason did the Stratophere’s Insanity ride. I pucker up at that height, so Trina and I just took pictures. Kris ended up doing all three rides multiple times. 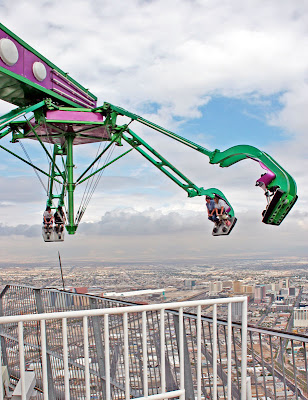 Vegas looked dead in the morning when we head to the Stratosphere. But it started to come alive as we waited for the Bellagio water show. 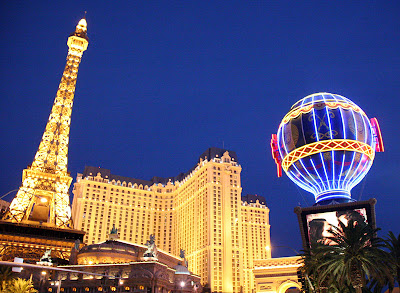 The Bellagio and Caesars are now part of ‘Old Vegas’ as new skyscraper hotel/casinos like the Aria, Vdara, and Cosmopolitan open up. 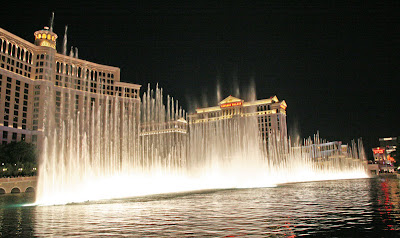 Justin and Aubry admire the P.F. Chang’s horse outside Planet Hollywood while we head in for dinner. 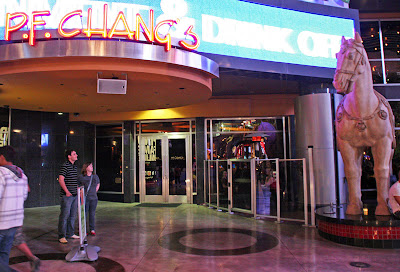 Good friends, good food, good drink! We hadn’t been in that room since we held our ‘reception’ there almost 7 years ago. 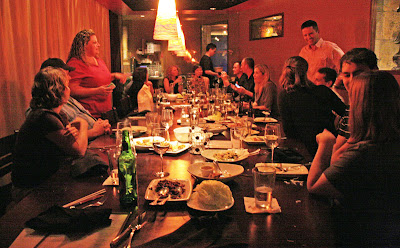 Group shot of the dinner group. It’s amazing how many friends are willing to show up to help celebrate when you tell them it’s in Vegas! :)

A most appropriate fortune for the night. 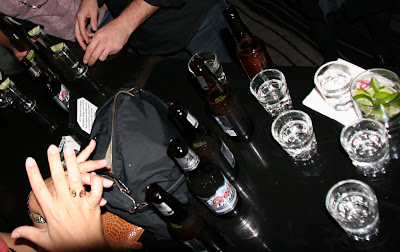 A few people headed back, a couple more showed up, and this turned out to be the hardcore party crew. 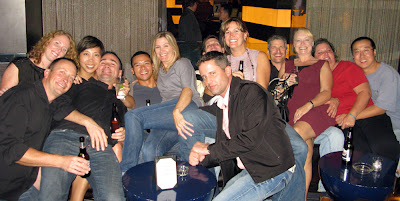 With this group of guys, we inevitably ended up at Pirahna Nightclub to watch the DC Cowboy Dance Company (as seen on America’s Got Talent). 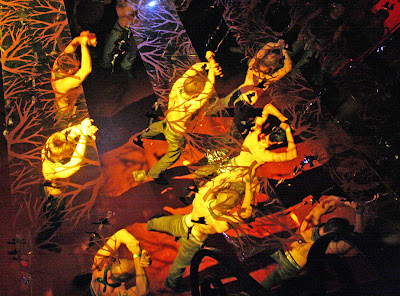