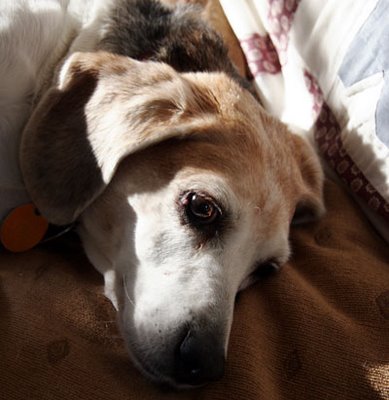 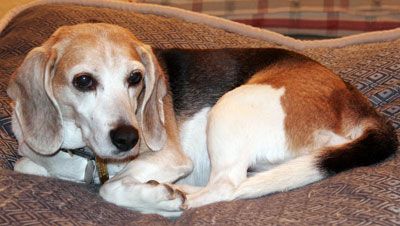 As much fun as Winston had playing with our kids, he was quite happy to see his mommy and daddy when they came to pick him up. Hercules and Daisy had no problems settling in to our household. Hercules had been fostered here, so it was no big deal for him. Daisy, the 10 year old beagle, was happy to see another dog her size. Looking at her convinced us that Parker is definitely mostly a beagle. There are 13“ and 15” beagles. Parker is more like a 16“ black beagle. It was amazing to see how much they looked alike. And Parker’s food-obsessiveness is definitely a beagle thing. Daisy and Parker were always on alert in case a plate needed cleaning before going in the dishwasher. Here she is claiming a dog bed for herself. 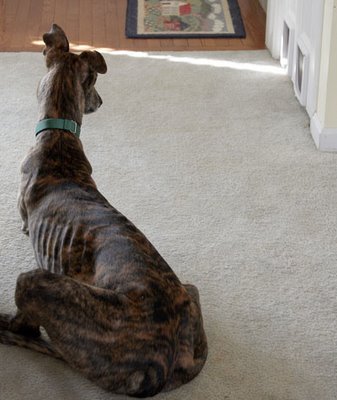 Hercules was initially thought to be a cat-safe dog. Later testing with Noah the crabby cat at our house proved otherwise. Look at the focus and concentration while he waits for a kitty to pop out the cat door. We locked both doors to prevent the kitties from coming up during the night and not being able to make it back down before the morning stampede of dogs. Once Hercules and Clay are gone, the kitties can come back up. Don’t feel too bad for them. They have it pretty nice down there. A sofa and loveseat and lots of other cushy places they don’t have to share with the dogs. 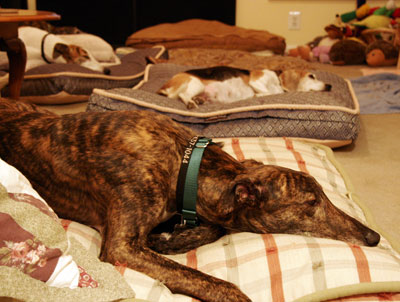 Behind Hercules is Daisy, then Winston, and if you squint, you can see Stella’s head behind that. 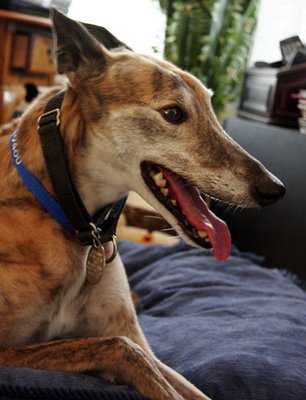 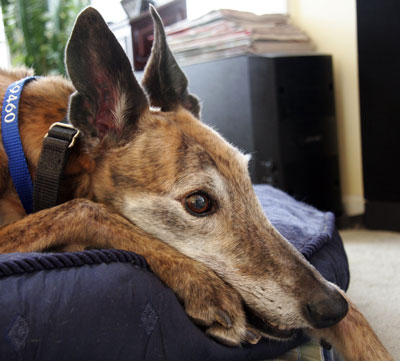 Speaking of Clay, at 10 years old, this is the first time we’ll have watched a senior greyhound. People are always making a fuss over the seniors. Now we know why. Look at that face. The graceful ‘greying’ of the face. And he is such a sweetie. He’s smaller than our Stella. His daddy said he was the runt of the litter. He’ll be with us for over a week. Last time they put him in a kennel, he didn’t eat the entire time. Supposedly he is a grazer, but with our guys noisily chowing down, he has learned to eat all in one sitting.
What does Parker think of all these guests coming and going? I’ll let the picture speak for itself. 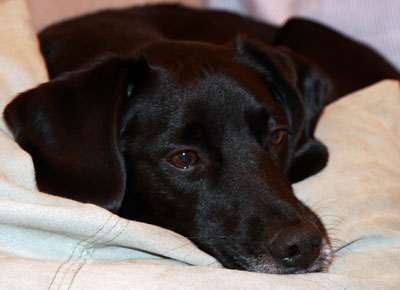 Winston won’t get on the couch unless asked. Here is a pic of all the kids on the couch. From left to right, it is Winston, Parker in the corner, Lucas, and Stella tolerating Lucas’ head against her butt. Looks like there is room for another grey. Sometimes I wonder how they ever survived at the kennel in a crate. Considering how much they crave a soft dog bed, couch or human bed, it’s a good thing they didn’t know about such things until after their racing careers. Otherwise, they may have formed a union and gone on strike at the track. 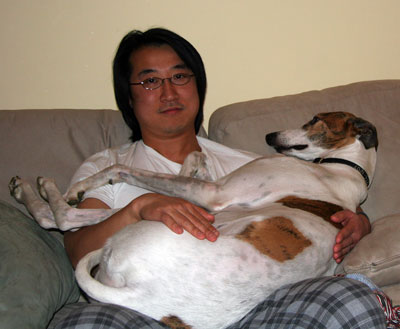 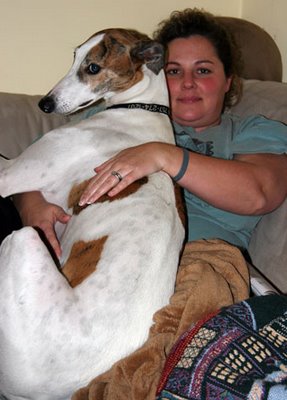 Winston is quite the snuggle hound. Very touch-feely. When we ask one of our guys to get on the couch, they jump up next to us and then back into us or lay their head against us. Not Winston. We would tap the cushion next to us and ask Winston if he wanted on the couch. Next thing you know, there is a dog in your lap. As much of a lap dog as Stella is, she never jumps straight into my lap.
It’s a dreary rainy day. Winston will stay through the weekend, but he will be joined by extra guests before his parents come back. This afternoon, we are expecting Hawk (Hercules in his previous life) and his new sister Daisy (10 yr old beagle). Wonder if she will recognize the beagle in Parker. They will barely have had time to finish sniffing each other’s butts before our next guest arrives. A greyhound owner in Northern Virginia who wrote to our group looking for a dog-sitter will be dropping off his 10 yr old grey on Saturday for a week. So we will have quite the houseful for the weekend. With a soggy yard from all the rain expected today, that’s 28 paws tracking in the mud. Need to replace that broken steam cleaner ASAP!
at 10:44 AM 2 comments: 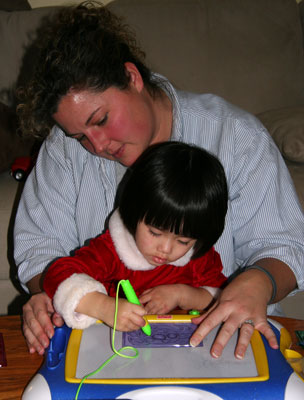 My sister and brother-in-law are taking Maya to the Netherlands to see his mother for Christmas this year. We had an early Christmas for her, so she could open presents we had gotten for her. She loves Parker dog, but the greys can sometimes intimidate her. A couple of times in the yard, Maya was running around swinging a stick. To Lucas, that’s the signal to play. He proceeded to circle her and then steal the stick and run around the yard with it. She started balling and yelling that she wanted her stick back. Guess it might have been a little bit scary to have a dog that is taller than you and weighs three times as much circling you like a shark. Didn’t phase Lucas at all as he was doing his laps around the yard with a stolen stick in his mouth. Here is a picture of Maya with her auntie Kristen playing with one her presents, a MagnaDoodle. 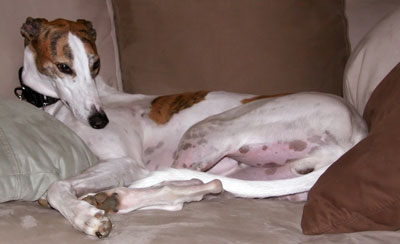 Luke and Sandy went back home this afternoon. We had an hour or two with our regular crew, then Winston came for his week-long stay. He was happy to be over, but wanted to go back with his parents when he realized they were leaving. Last time we watched him, he was all about playing with our kids, and barely noticed his parents had left. He settled in quickly onto the chaise part of the couch. He looked so cute, I had to cover him up for his nap. 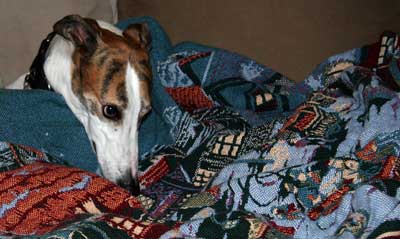 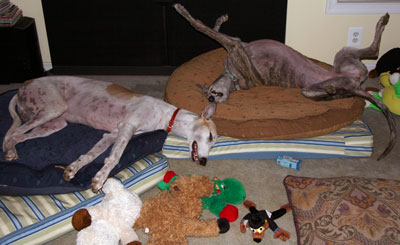 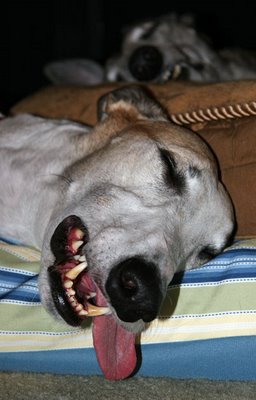 Since Winston was on the couch, Lucas and Stella decided to lay on the dog beds. As usual, Lucas was on his side hanging off the bed. Stella was in full cockroach position. Upon closer inspection, it appears Lucas had ETS (escaped tongue syndrome). Stella is well known for having ETS. It appears this is a contagious condition which has now afflicted poor Lucas. We hope it doesn’t spread to our house guests and fosters.
at 11:44 AM 1 comment: 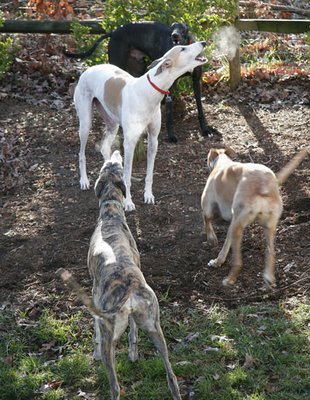 Stella: Hey Lucas, wanta teach these newbies something? Lucas: yeah, whatever you want sis. Stella: You got that pack of smokes I scared off the kid at the bus stop? Lucas: Oh, I see where you’re going with this. Stella: Sandy, Luke, come over here, got something to show you. Lucas: I think I can make some smoke rings.
The kids were roo’ing the other morning. There was still a chill in the air. If you look closely at Lucas and Stella, you can see their breath. Looks like they are smoking. Isn’t that what killed the dinosaurs?
We will be baby-sitting Luke and Sandy till Sunday. Then we swap on Sunday and get to watch Winston for a week. Winston is a regular here and enjoys being able to play with other greys. I think his parents will ‘chip’ soon, and he will have a sister in the new year. Then we swap again the following week. Hercules recently got rehomed to a couple in NoVA. We will be watching him and his new sister Daisy the beagle during the week of Christmas. Since Parker is a ‘beagle/lab’ mix, I’m sure he’ll love having another non-grey around. Then we are expecting another 8-grey haul from Orlando on Dec 30th. Our next foster?
at 8:17 AM 2 comments:

We are watching Luke (SJ’s Limit) and Sandy (Kelso’s Goddess) while their parents, Shannon and Kevin, are on their honeymoon this week. We couldn’t think of a better gift than watching their kids. They got Luke first. Similar to our Lucas, he’s just a big goofy boy. They thought he was smart until they got Sandy. Luckily, we got Stella first, and she was able to show Lucas how everything worked. Now with a sister to lead the way, Luke is doing great. 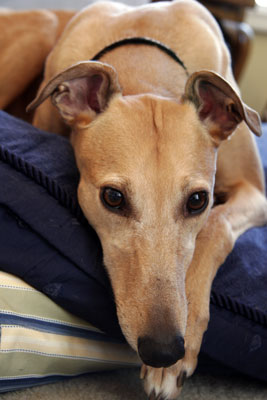 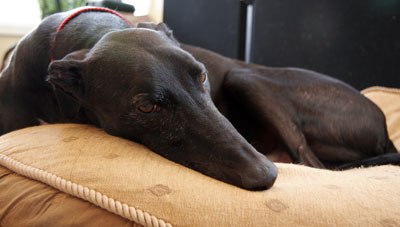 Here are Sandy and Luke taking a break on double-layered dog beds. We usually have five or six beds downstairs, so when we don’t have a houseful, we double-stack the beds for more open space. The greys really seem to like the extra cushion. 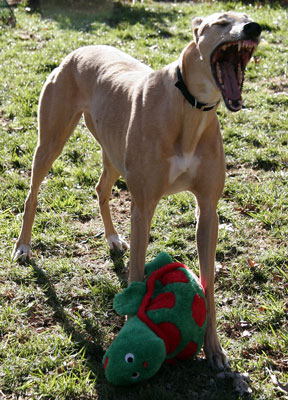 You wanta piece of this? 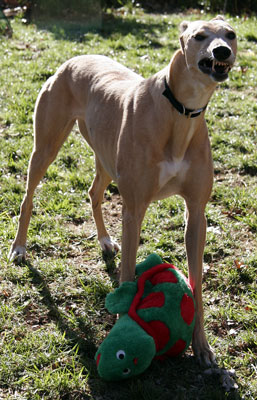 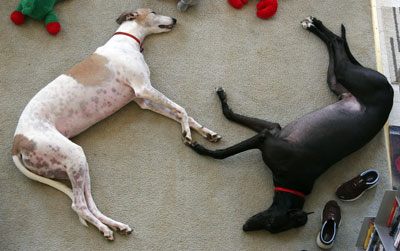 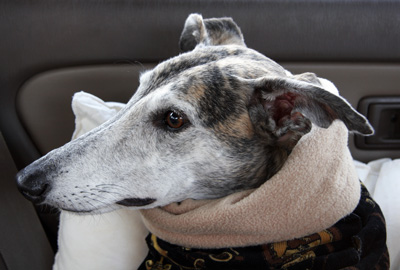 Had another busy greyhound weekend. On Saturday, we participated in the local Fredericksburg Christmas Parade downtown. The weather was chilly but not cold. We had seven dogs and five people, so we took two cars. Trina and I dropped off Jason, Kris and Aubry with the dogs. We got there a half hour before the parade started and had to park a good distance away. Mental note for next year’s parade: get there very early if I want a decent parking space. I got a few minutes away from the car before I realized I didn’t have my camera. It was already quite dark, so I figured the pictures wouldn’t be that great anyway. I did manage to get this picture of Stella in her coat on the ride to the parade. We had about 35 greys walk the entire route. Even though we were right in front of a marching band, it didn’t seem to bother any of the dogs.
On Sunday, we went to Leesburg for the annual VAGA Christmas party. It was held at a doggie daycare facility, and we were perpetually mopping up as it turned out to be one big pee-fest. Here are various pics from the event. 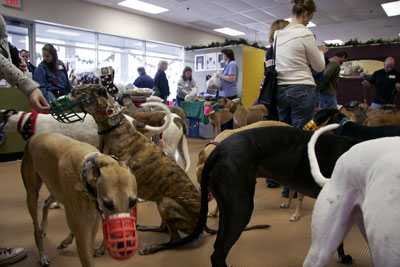 The first shot shows a sea of greyhounds. They were just milling around, sniffing, and peeing. 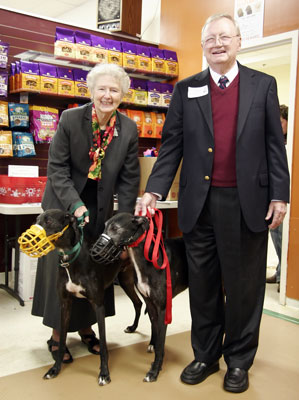 The second pic is of Billy and Andy with their new parents. They were previously mentioned in the ‘Birthday Dog Haul’ post. The next couple of pics are of the winter coat fashion show. 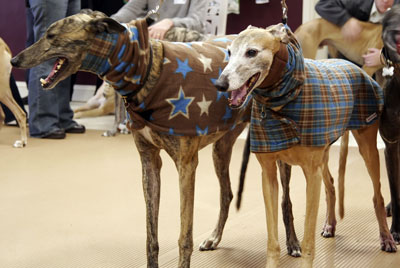 The two greys are Grant and Amber strutting their stuff. 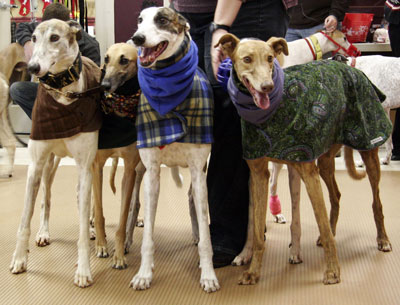 Our foster Shirley is the second to left in the pack of four showing off more winter coats. 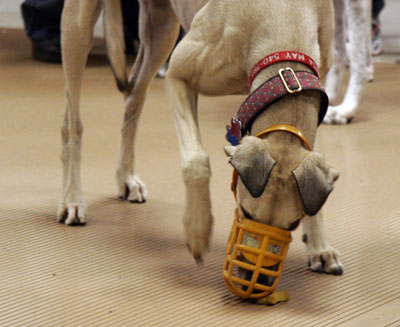 The last pic is of Louisa May determined to eat a biscuit through her muzzle. She did manage to finally get it.
We went up with four greys and came back with three. A prospective adopter came to the party to meet Shirley. We left her with Carolyn, VAGA’s president, so she could take Shirley on the home visit sometime this week. Since we hadn’t expected to leave Shirley there, we barely got to say goodbye. It’s just our regular crew at home now. For how long???
at 8:11 PM 2 comments: