Aubry came back to Virginia for a visit. We threw a little party for her. I smoked a pork shoulder for 17 hrs on the Egg for pulled pork sandwiches. The smoked jalapeno poppers were also yummy. We had a handful of people and dogs. The kids probably thought it was just another playdate. They are always happy to see each other. Can you find all 11 greys, Parker, and Murphy in the picture? 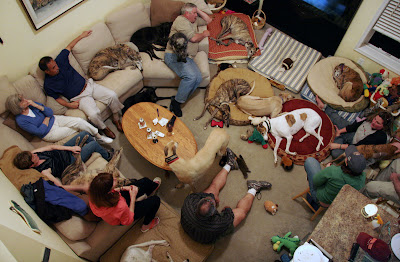 On a sad note, a few people and their dogs did not make it to the party. Jake and Libbie had gotten loose and were sadly found later the next day. To lose two kids so suddenly.... I know I was a basketcase after losing Lucas. I don’t have any pics of Libbie, but here is a picture of Jake (black with blue collar) with his three sisters and his mother, Ally. 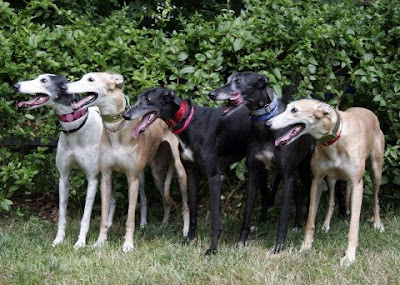 Kathy was watching a couple of senior sisters who came to the party. I dubbed them the ‘Golden Girls’. 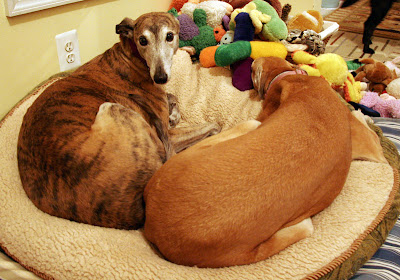 The Pine Kids came to stay with us for a week. Luke, Sandy, and Jasmine.
Luke, Jasmine, and Sunflower do their Charlie’s Angel’s pose. 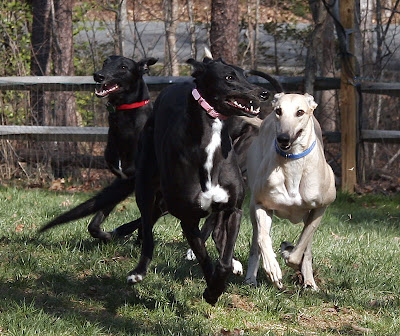 Is she still following me? 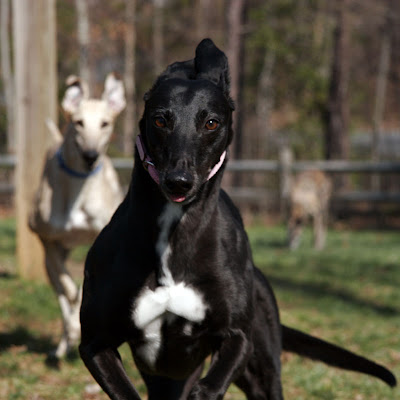 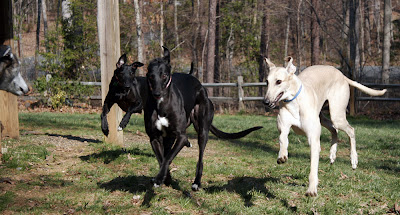 Jaime has started to eat one of the oak trees in the yard. Jasmine being a copycat. 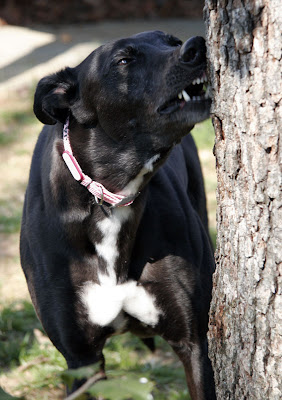 The kids got to go downtown for the Fredericksburg St. Patrick’s Day Parade. They may not always like getting dressed up, but they sure love going out and meeting people who tell them how pretty they are then proceed to give them lots of hugs and kisses. What kinds of hounds are they? Attention hounds!
Kris got the kids all dressed up and ready to strut their stuff. Sunflower is unsure of how to wear her lei. She went from kennel to foster home to parade in a matter of days. 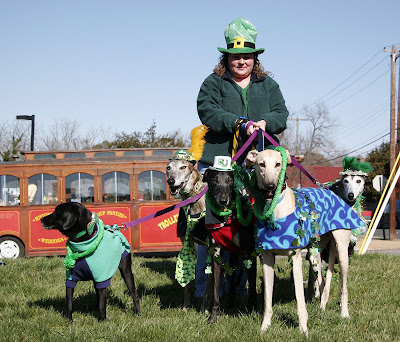 Stanley thought the chicks would really dig the tie. A clip-on just wouldn’t cut it.

Lady looks stunning in her green boa. Critter is wearing his Harley outfit, and is wondering when he gets to take a ride on his dad’s Harley-Davidson. 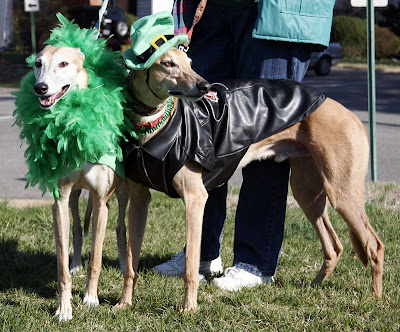 We got there a bit early to check in and secure our spot in line. Stanley thought that was a bit too long of a wait, and decided to rest his head on Jaime. 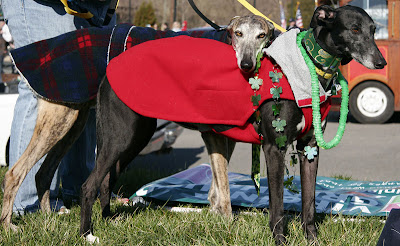 A recent adoptee, Whyda, came out for the festivities. 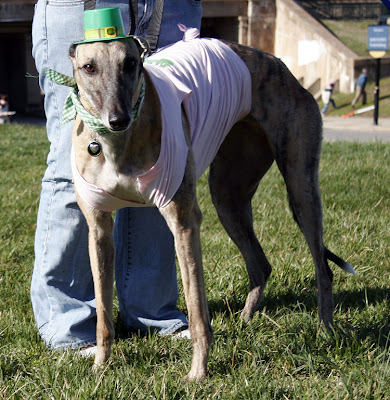 Critter decided it was cooler to be seen with another girl besides his sister. Leah says she digs the leather jacket. 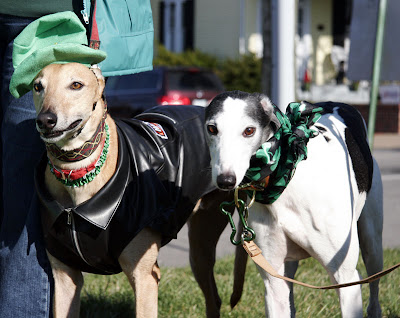 To keep the kids occupied while waiting for the parade to begin, Kris practices her ‘Down’ with Jaime, and ‘Sit’ with Stanley. Yeah, right. Lazy dogs. 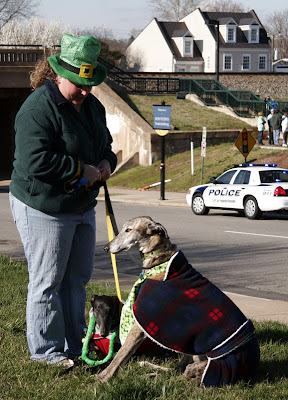 Stanley went with his mommy to Sandy Paws at Jekyll Island, Georgia. He rode with Doreen’s kids: Sidney, Roxie, and Tempest. I got to stay home with the girls and Parker. Following are a few of Doreen’s pics from the event.
Stanley (front) with Tempest and Roxie in the back of Doreen’s minivan. It was a nice 10 hour drive to Jekyll Island. Almost to the Florida border. 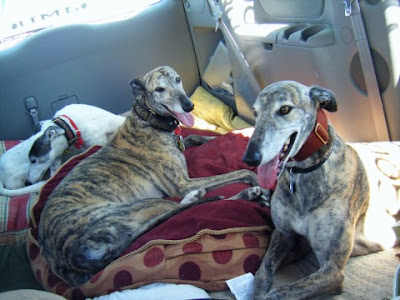 Kris walking on the beach with Stanley. Sidney enjoys soaking his paws in the waves. Roxie says, hey, don’t forget about me. 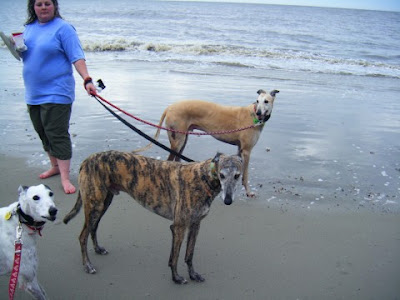 Kris bought a few things there. There were lots of vendors to shop at and seminars to attend. Stanley managed to get a new martingale collar. One of the other VAGA members who went down got more than a collar. Lynda managed to come back with a ‘cowgirl’. This makes girl number 5 for her. Congratulations Ted! 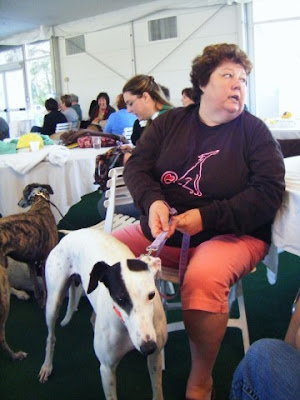 When Stanley got back, he was wiped out. 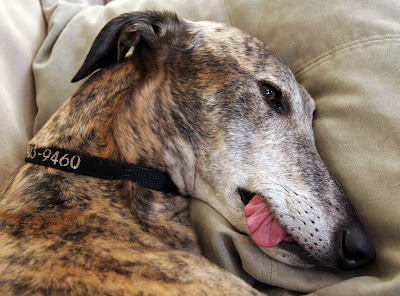 I was not without a big dumb brindle boy just because Stanley was at Sandy Paws. Topsail came to stay for the weekend while his parents were away. He loves his toys. This is just minutes after he got dropped off. 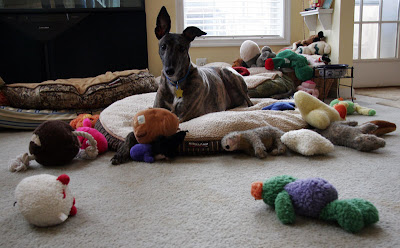 We had a dog haul this past weekend. Our kids are wondering if any of them are coming home with us. As a matter of fact, two of them did. Chaska, a black female, stayed with us for the afternoon till we could drop her off at her new home. Sunflower, a fawn female, is with us for a couple of weeks. 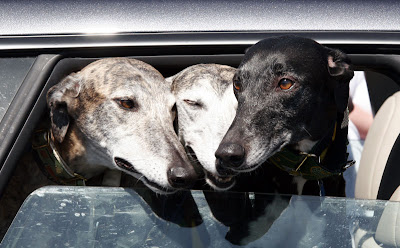 Sunflower stops to smell the honeysuckle. 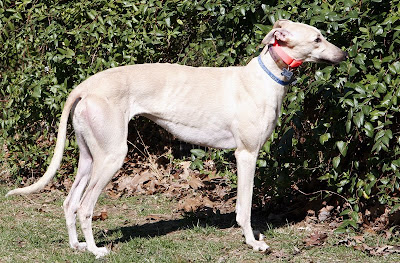 Chaska ain’t the ‘stop to smell the roses’ type. She’s a runner. Her new home doesn’t have a fenced-in yard. So she was enjoying it while she had it. 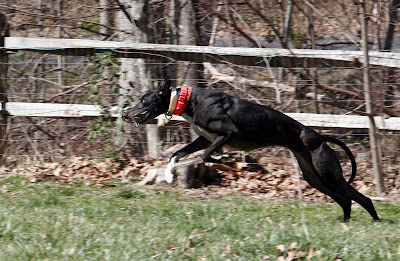 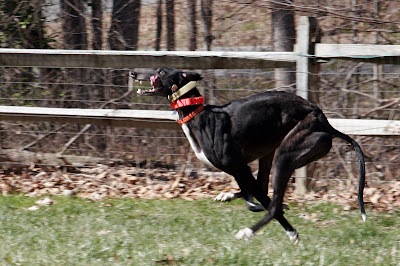 She’s a petite little girl. What a cutie-pie.

It didn’t take very long for Sunflower to figure out stairs, doggie door, stuffies, and the dog bed. 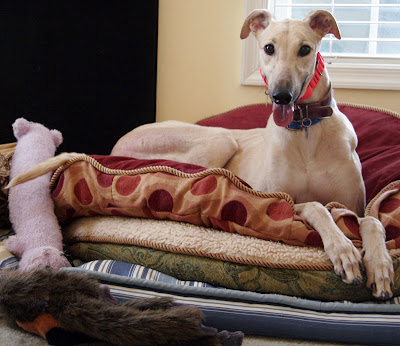