Kids in the House

It’s been a little while since I’ve posted any pics of the kids. Along with the regular crew, we still have Alex, and watched Sabrina over the weekend.
Alex has really come far. He’s still skittish, but now he’s much better with being petted on a dog bed or coming to greet you. 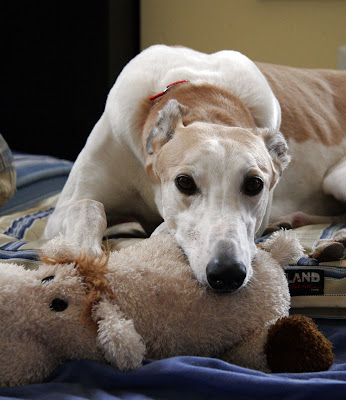 Sabrina stayed with us over the weekend. She’s such a sweetie. Since she’s an only dog, this is like doggie camp. I just got a new bed from Costco, and she had to be the first to check it out. 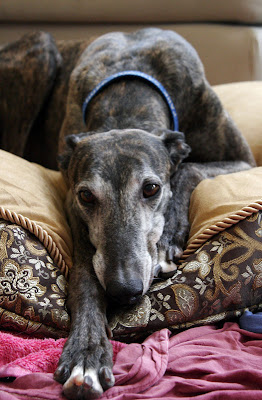 Stella in her usual spot on the couch. She can keep an eye on everything from there. 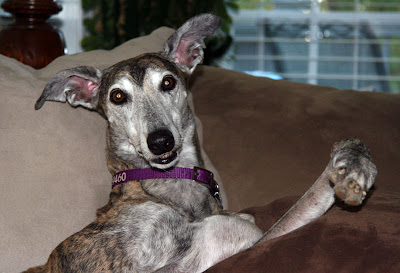 Parker and Jaime decided to spend a little snuggling time together on the couch. 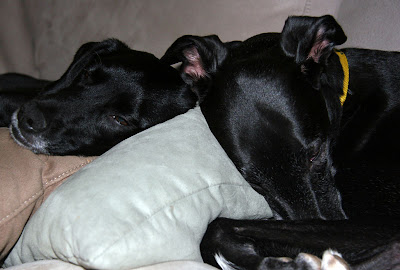 Stanley is a boy who truly enjoys sleeping. He’s not afraid to let it all hang out. Ear up, eyes back, tongue out. 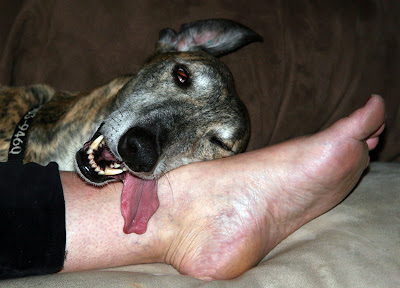 On another note, Debbie and Diane of VAGA are in Spain at the Scooby Rescue facility to help out with Galgo Rescue. I was going to link to a blog of their trip, but I think they only have intermittent internet access while there. They should be coming back with two Galgos going to forever homes back in the States. Maybe even a puppy?
at 9:13 AM 6 comments:

We spent one day of our vacation in Albuquerque. It’s about an hour away from Santa Fe. The annual balloon festival was going on that week. We had never been to one, but wanted to check it out. Oops, that’s Fiesta. Aubry reminded us that all festivals in New Mexico are Fiestas.

Like any good festival, there are lots of food stands. How can you can tell you are in the New Mexico? Where else do they offer breakfast burritos, green chile burgers, frito pies, and green chile tortilla burgers. Sounds good, don’t it? 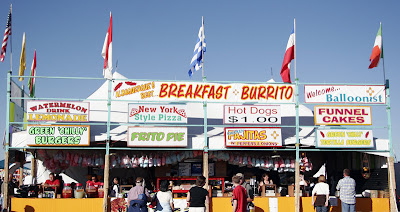 Kris and Aubry at an alpaca vendor stand. The stuff is so soft. Even the stuffed toy alpaca is made of real alpaca. 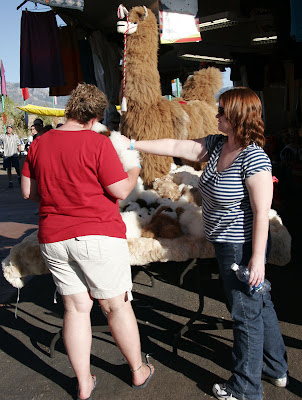 What would a festival be without guys with chainsaws turning logs into works of art. It really is amazing what you can do with a chainsaw. 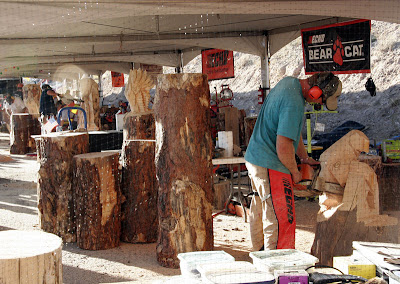 Funny how the one shot of me and Kris at the festival is in front of a beer balloon. 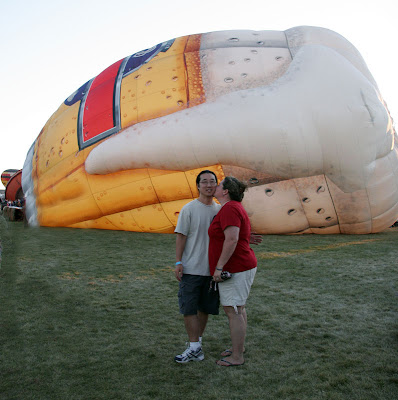 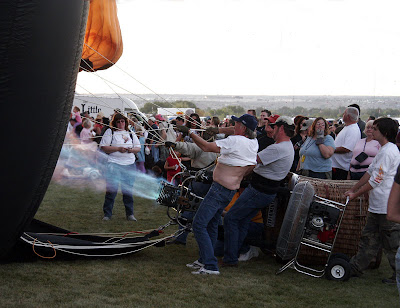 We spent quite a bit of time watching one team preparing to get their balloon in the air. We used the shade of the van preparing the rabbit balloon to stay cool. 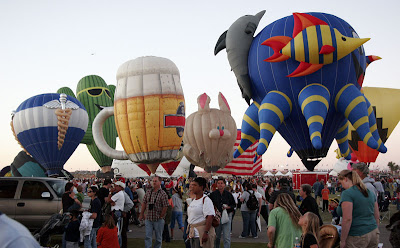 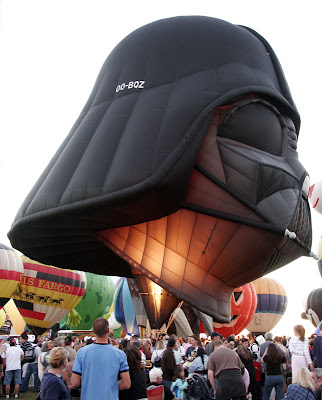 Here is a fisheye view of the balloons at the festival. Maybe I could get a balloon made in the shape of a greyhound?

We left the festival and headed to Sandia Peak. It has the longest aerial tram in the world. Who would’ve guessed it was in Albuquerque. The top is about two miles about sea level. Great for someone like me who is afraid of heights. They said because of the altitude, each drink is more like two or three. So of course we had to have a drink at the top. This is a shot of Albuquerque from the top. That little flash of light in the bottom right corner is the fireworks show from the balloon fiesta. 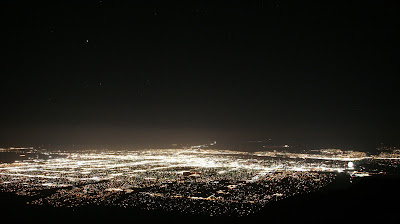 Just got back from a week-long vacation in Santa Fe. We took a circuitous route via a couple of days in Las Vegas. It’s been about six months since Aubry left for Santa Fe. We met her and her mom in Vegas. We try to go out every 2-3 years. Didn’t get any pics while in Vegas. The main highlights were Aubry and Kris dancing on the bar at Coyote Ugly, and dinner at Tom Colicchio’s Craftsteak at the MGM. Kobe beef - tartare, filet, ribeye, flank, and sirloin. Served family-style, and more than four people could finish. Melted like butter!

This was our first trip to Sante Fe, NM. Last count was about 75,000 people. Seemed like half were artists or in the artisan business. A slow relaxed atmosphere. Especially coming from the East Coast. Another thing that stands out is the architecture. Everything is adobe. Even the parking lot looks cool. 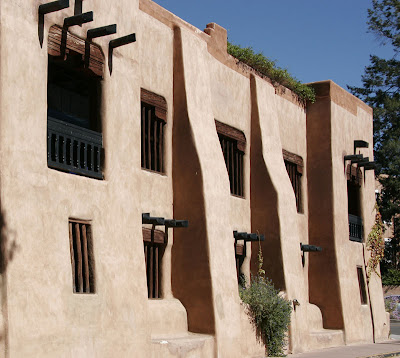 Here are Aubry & Kris walking the labyrinth of life outside the Basilica of St. Francis of Assisi. 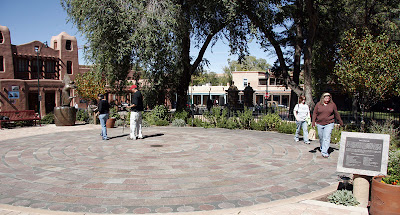 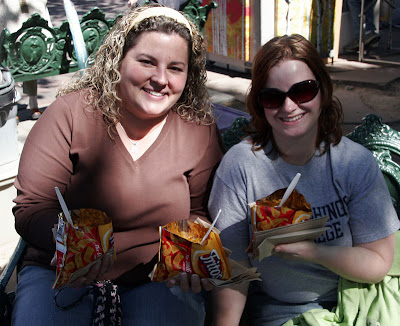 This is a meal in itself. 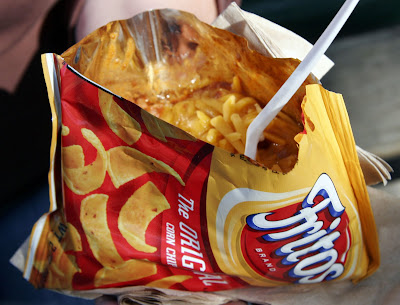 Next to the plaza is a museum where local Native American artisans sell their wares. Santa Fe takes their tourism very seriously. The artisans have to prove their ancestry for three generations before being considered.

We had green chile cheeseburgers at Bobcat Bite. Everything comes with green chiles out here. It’s always ranked in the top handful of hamburgers joints in the U.S. each year. It can only hold a dozen people inside and half that on the patio. Great burgers! The name came from the fact that bobcats used to come to the backdoor for scraps of food. 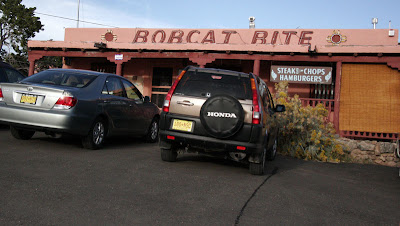 After a day of trying not to buy all the Indian arts and crafts in sight, we settled back at the hotel for a nightcap. The fireplace kept us warm as the desert air started to cool down. 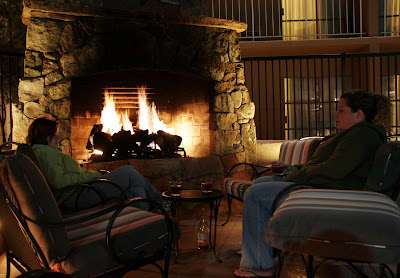 We went on a hike at the nearby Tent Rock National Park. It is right next to the Cochiti Indian Reservation. The mountain top formations looked similar to the hoodoos of Bryce Canyon in southern Utah. The ‘tent rocks’ looked like big concrete cones. Almost didn’t look natural. 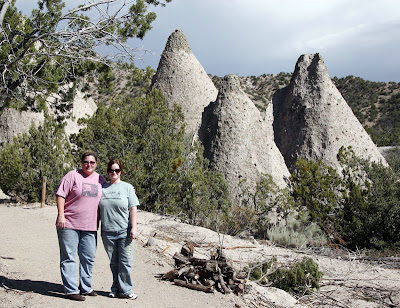 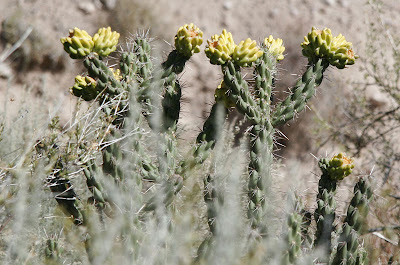 A pretty shot of a burned tree with hoodoos in the background. 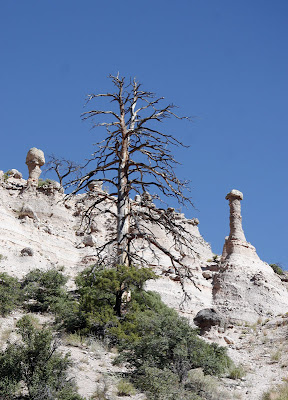 On the way back to town, we took an exit looking for the hippie town of Madrid. Instead, we found the Sante Fe Brewing Co. Sweet. Of course we had to sit on the patio and have a glass of Octoberfest. Nothing like a good microbrew! 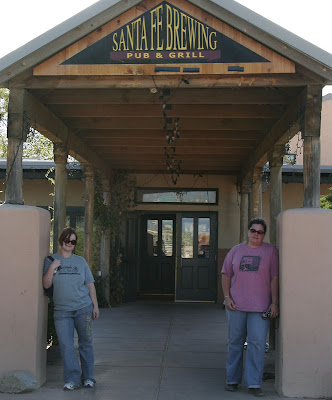 Santa Fe is full of artists. With artists come galleries. We visited a few. But with most pieces costing $1000 - 10,000 or so, we decided to take a free picture with a sculpture outside. 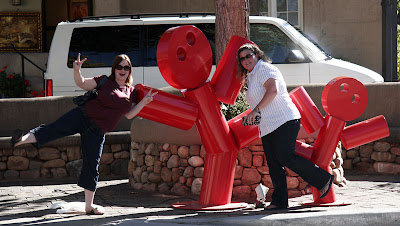 I’m not musically-inclined by any means. But this Native American style flute was calling me. I got a little lesson from a pro. I hope I don’t end up calling all the stray cats in the neighborhood while learning how to play. 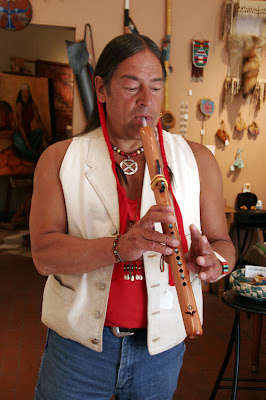 We also went to nearby Albuquerque for a day to see the International Balloon Festival. That will get an entry by itself.
I love the atmosphere of the Southwest U.S. A slow relaxed pace of life with beautiful desert scenery. I could definitely get used to that!
at 8:04 PM 4 comments: