This whole job change thing is a real time-suck. Taking pics of the kids and blogging has taken a back seat to getting up to speed at work. I haven’t checked a blog in six weeks. My new territory is Virginia to Maine, so I’ll be traveling even more than before. At some point in the near future, when I’m settled in at work, I’ll get back to a more regular schedule of blogging and commenting.
Now on to the bad news. Jaime has a lump at her amputation site. Chemo change from Carboplatin to Doxorubicin will hopefully help. Biopsy of lump came back as osteo. She will turn 11 at the end of this week. We will make it an extra special celebration.
Stella's wrist had a little bump on it. X-ray showed a cyst, but they did not think it was osteo. We waited it out a couple of weeks, but it only got bigger. After consulting with the specialist, we decided on amputation. A bone graft at her age would have been way too risky. Post-amputation biopsy showed it was osteo. Since Stella’s bone didn’t break, and it was distal, hopefully her chances are good. 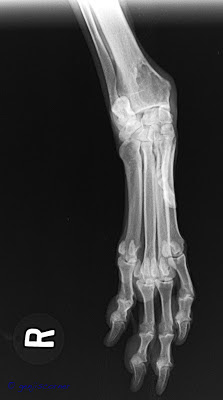 Jason and Trina came to see Stella before she goes in for surgery. Jaime hides when she hears what the conversation is about. 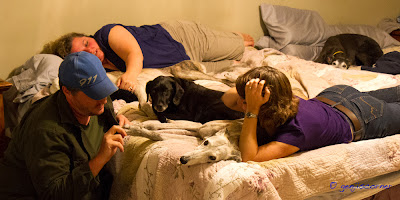 Unlike Jaime, Stella went into a funk, and wouldn’t really eat anything. We did get her to eat most of a whole roast turkey. You are what you eat. We would wake up in the morning , and the bedroom smelled like turkey from all her turkey farts all night. And we ended up feeding her in bed. 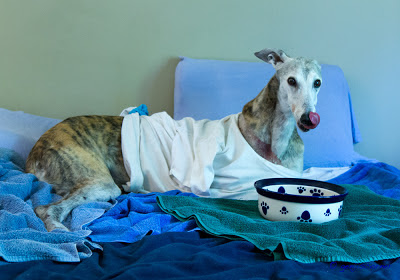 Jaime's turn to watch over her sister. There is some bruising that has moved down to her belly. 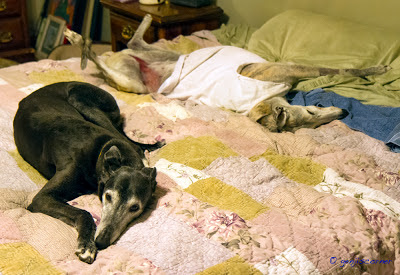 By the second week, she was sick of turkey, and only eating baby food. After over two weeks, she is finally getting up on her own, eating baby food / kibble standing at her bowl, and going out the doggie door to do her business. The vet said that Jaime was a superstar, and Stella is more par for the course for a greyhound. 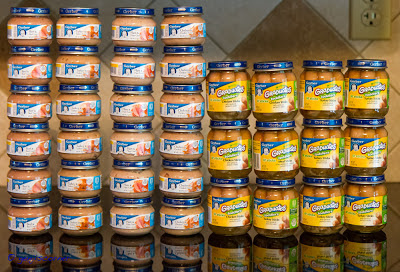 Jaime showing off by her poster at the Furry Friends Jubilee sponsored by our specialty vet. Stella turns away from the camera as she is not ready for the public to see her missing leg. In order for everyone to be more comfortable. Meaning the humans. We took the queen-size bed out of the guest bedroom, and put it next to our king-size bed. I was hoping that we would now have enough space for everyone. 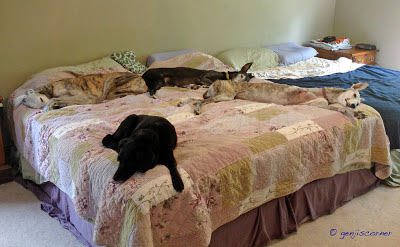 We took all the kids this past weekend to Cooper Vineyards annual Lucy’s SPCA event. Both of the girls did well. Stella seemed to be happy to be out of the house.
at 10:56 AM